This Sliding Bar can be switched on or off in theme options, and can take any widget you throw at it or even fill it with your custom HTML Code. Its perfect for grabbing the attention of your viewers. Choose between 1, 2, 3 or 4 columns, set the background color, widget divider color, activate transparency, a top border or fully disable it on desktop and mobile.
+34 627 896 504|enquiry@theflexiblechef.co.uk
Previous Next

I have no excuse not to recover my sixteen pack. I walk but that’s not enough so after acquiring a bench and some (light) weights I have today set about pumping the neoprene in order to increase my cardiovascular capacity and general fitness as I seem to have developed a touch of asthma in older life.

And what is more, since arriving in Spain my borderline blood pressure has increased (increased, how did that happen?) to the wrong side of the line so putting a little laziness to one side I have motivation now, don’t I? 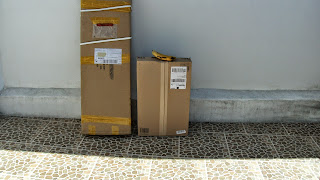 And here is my outside fitness set-up, funny that I had two washers left over from the assembly. 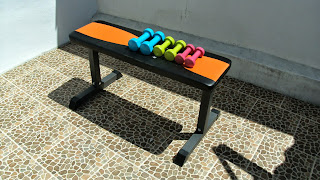 I know that the fitness studio is not colour co-ordinated but as I have a walled garden not too many neighbours will notice.

Anyhow, I noticed I was sweating from the pre-workout set-up as I sat down with my banana (see how serious I am?) and the manual. The first thing I read was: Notice: See your medical
doctor before embarking on a fitness regime. Huh, you know about men and doctors…

This is me a couple of months ago in Alicante when visiting my little sister and her man, Andy, sporting a twenty pack so a sixteen pack should be easily achievable, shouldn’t it? Andy (is in white, he also has a 20 pack). 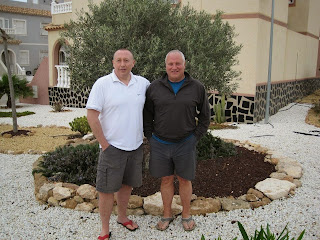 Anyway, the first day wasn’t so bad except for the odd fly causing an irritation but I suppose that’s the downside to having an outside fitness studio. I’ll let you know how my muscles feel later.

Now is it Cruzcampo time?