♫ ♪ ♫ “My country’s skies, Are bluer than the ocean, And sunlight beams, on clover leaf and pine.” ♪ ♫♪ ♫ Finlandia

I’ve spent a lot of time in Scandinavia to which I add Finland but in fact it’s really part of the Nordic region not a true Scandinavian country and that’s why its airline, Finnair isn’t part of SAS. That’s Scandinavian Airline System not the SAS.

I love the land of the lakes, there are millions of them or so it seems and I like Finns, well, most of them and especially absent good friends of mine, Päivi Jämsä and Eero Rissanen. I’ve walked across frozen lakes and enjoyed fresh fish at a Russian restaurant, I believe it was Zander. Anyway, in this country I had reindeer for the first time; I think it was back in the 70’s in Helsinki. I also experienced my first sauna.

I was there on business, logistics business.  Anyway, I was accompanying my boss, an Anglo-Indian with an awfully, awfully nice accent and his head stuck up his arse. The reason for me mentioning this is so you can picture what happened next.

It was usual to finish work at 4pm so our hosts drove us to a sort of country club on the outskirts of Helsinki. It was winter, cold, snow and thick ice.

We arrived at 5pm and were escorted by a very nice female to our ‘suite’ where we undressed in order to enter the awaiting sauna. It looked very hot in there. The Finns had no hesitation about stripping off although they weren’t brazen about it and I followed suit. I was young and quite fit so it didn’t worry me but my boss who came complete with ample paunch knew he wouldn’t have the same authority without his clothes and indeed he didn’t, he had a very small willy too. I couldn’t help but notice.

Anyway, in the safety of the sauna he used the towel to sit on to cover his private parts. Me, being bravo and all was quite happy to ladle more water onto the hot coals to create extra heat.

That was my downfall.

After a short while I was aware of an acute burning sensation on the back of my neck, I rubbed it several times before realising that my fine St Christopher gold neck chain was extremely hot and doing its utmost to cause me pain. That quickly came off and I didn’t feel so smug about seeing my boss squirm any longer.

As part of the sauna ceremony one retires from the sauna back to the lounging area. We were hot and flopping about when the door popped open and the lovely female who had previously escorted us to our ‘suite’ strolled in and without a bat of an eyelid placed a tray of very cold bottled beers, hot sausages and potato salad on the table. I am not sure what was the most attractive, the cold beer or the female.

We dipped (and note the word dipped or more precisely dip) in and out of the sauna, enjoying the heat, the beers, sausages and potato salad.

One of the Finns stood up and said that it was time for a dip. The boss and I wandered naked along the corridor following our hosts and upon opening the door at the end of the passage revealed a vacant Olympic size pool, I was hot and sweaty and couldn’t wait to jump in, which I did. Nobody warned me that it was icy, icy, icy cold and part of the sauna experience. Brrrr. Now my willy had shrunk, I was even giving my boss a run for his money. 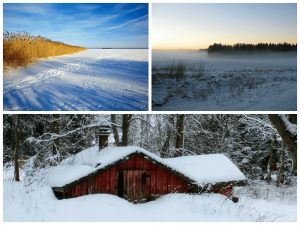 After a very short while we returned along the corridor to our ‘suite’ when one of the Finns asked me if I wanted a wash. I thought he meant a hot shower and that’s just what I needed. He opened a door and standing there, like a fisher woman, was an old bat in a white plastic overall and wellies, they were white too, pointing at a marble slab where I would get a ‘wash’ – my willy shrunk even further when I saw her with a large loofer in her hand. She hosed me down with warmish water, yes with a hose pipe! And then proceeded to wash me with her loofer ending with a final rinse of, yes you have guessed, cold water, and very cold water. More brrrr. I declined the offer of a thrashing with a bunch of birch twigs.

There is a wonderful feeling of cleanliness after a sauna, dip and wash which was only spoilt by getting dressed into clothes that I had been wearing since 7am.

We left the country club only to return to the car (a diesel Mercedes) to find that the engine was frozen or the fuel tank was, I’m not sure which. But it wasn’t a problem for the Finns because they simply lit a fire under it…

I’ve experienced saunas since. Once in darkest, deepest Finland, near Hämeenlinna I think, well, it was close to a frozen lake anyway. The sauna was merely a hut and instead of a dip in the swimming pool you had to roll in the snow. I declined because some of it was yellow.

♫ ♪ ♫ “Grandma got runned over by a reindeer, walking home from our house Christmas Eve. (On her way home) You can say there’s no such thing as Santa, (Say there’s no Santa) but as for me and Grandpa, we believe. (Lord, we believe)” ♪ ♫♪ ♫ Cledus T. Judd

Now, listen up – about the reindeer. I cannot recall which fancy restaurant we were in but it was on the top floor of a hotel over-looking the city of Helsinki. Marvellous views, great company and fine food. Being English I couldn’t help thinking about reindeer, Santa’s little reindeer but something adventurous told me to try it. It came in due time, reindeer meatballs served with Cloudberries. I don’t know much about reindeer but they were bred for Cloudberries. Cloudberries grow in the mountains at a certain height above sea level so somebody had gone to a lot of trouble to climb up a mountain, through snow and ice to pick, transport, prepare and put them on my plate. I appreciated that. And the reindeer deserved it too.  I thought about Cloudberry J2O, I must suggest that to Britvic.

Health note: Deer meat is one of the healthiest types of red meat. It is extremely high in protein while maintaining a low fat content. It is also low in calories and cholesterol. 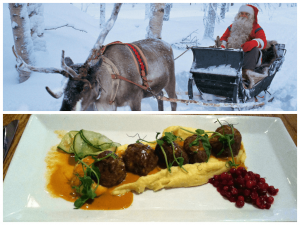