Alice May Brock was the owner of Alice’s Restaurant in Massachusetts, USA, made famous by Arlo Guthrie’s 1967 song ‘Alice’s Restaurant’ which, in reality, was a protest song about the Vietnam War draft. Two years later a film by the same name was released. It was directed by the ‘Bonnie & Clyde’ director, Arthur Penn.

After reading her short observation below I realised that Alice and I have something in common:

And to continue with the connection between Alice and Arlo I’d repeat the lyrics of Guthrie’s song but it is about 15 pages long, anyhow, here’s a taster, the final verse:

And can you imagine fifty people a day? I said FIFTY people a day . . .
Walkin’ in, singin’ a bar of “Alice’s Restaurant” and walkin’ out? Friends,
They may think it’s a MOVEMENT, and that’s what it is: THE ALICE’S
RESTAURANT ANTI-MASSACREE MOVEMENT! . . . and all you gotta do to join is to
Sing it the next time it comes around on the guitar.

And on the back of all this Alice published a book in January, 1969 – Alice’s Restaurant Cookbook and since reading the following on The Food Timeline Library I have decided to buy her book. A second-hand copy is available on Amazon for 12 quid. It could be an interesting buy.

The theme of the book is that people should not be afraid to experiment when they’re cooking… So many cookbooks say, ‘Do Not, do not, do not! Do not substitute ingredients. Do not try to make a soufflé unless you have a soufflé dish.’ They make cooking sound like a fantastic science, and that makes a lot of people afraid to cook. Hell, you can make a soufflé in a garbage can lid if you want to.’…

Born in 1941, today, Alice is alive, kicking and painting at her studio in Princetown, MA. 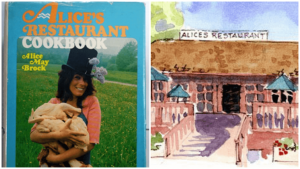