The best paella I have ever had was on the Costa Brava about 20km north of Barcelona when I was ambling around Europe in my motor-home during a former life. Anyway, an ex-girlfriend, Louise, came to stay with me for 2 weeks… we did a lot of toddling around but she wanted the beach so she got El Masnou and on their beach we got a fabulous paella in a little hut (a Chiringuito) that took a long time to cook, about a bottle of good red wine long which wasn’t so bad as we had another with the paella. It was fabulous and cheap too…

Apparently, La Pepica has been serving paella in Valencia (the home of paella) since 1898. I’ve never been but I bet the Chiringuito at El Masnou can give them a run for their money.

Here’s an Andalucían recipe for paella, its use of rabbit and pork is typical of the region.

1 small rabbit or half a large one, skinned, jointed and cut into small pieces

Thyme & rosemary fresh or dried at a push

Glass white wine, drink the rest of the bottle which is the chef’s privilege

Lemons, juice from 2 of them

Sprinkle the rabbit and pork with a little salt; add crushed garlic, lemon juice, seasoning, herbs, and place covered in the fridge overnight to marinate.

Pour a good glug of extra virgin olive oil into a paella pan then brown the meat – move browned meat to side of the pan.

Prepare the artichokes by peeling off the exterior leaves and cut the hearts into quarters, sprinkle with lemon juice to stop them discolouring.

Gently cook on a medium heat the peppers and onions until soft.

Add tomatoes cooking until reduced slightly before adding the artichokes and garlic cooking for another 5 minutes, add all the herbs and saffron and paprika plus the tomato paste and a glass of white wine and stir well.

Add the paella rice. For every one cup of rice you need three or four of stock.

When all the rice is added, mix well and cook for a few minutes until it becomes translucent, then add the stock – one cup at a time, and fill the paella pan with stock up to the middle of the rivets of the handles at the top of the pan.

Stir ONCE very well. Lower heat to gently cook for 20 minutes or so or until the stock is absorbed, but keeping an eye making sure the paella doesn’t burn on the bottom.

Remove from heat when done and allow it to rest for 5 minutes.

This recipe was very kindly supplied by my Madrilenian friend, Janie of Arc. She says the art is not to burn it. And that’s where we differ because if the bottom layer of rice yields a golden caramelised crust, called socarrat, then you know you’ve reached the pinnacle of paella godliness when this has happened. Janie of Arc is an ex friend these days as she fell out with me over socorrat.

And by the way paella comes from the name of the pan it is made in, the Latin term patella, a flat plate on which offerings were made to the Gods. So now you know. 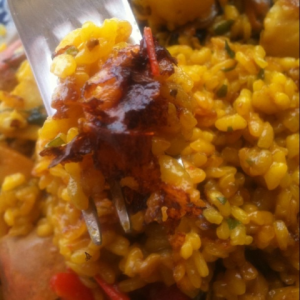