This is sort of a take on Jamie Oliver’s Hamilton Poussin with the exception of bacon and sage, neither of which were to hand so rosemary took over. And because this is my version I added carrots, whole cloves garlic, whole fresh tomato and shallots to the roasting tin.

It is a simple and flexible way to cook up a quick roast as it is only in the oven for 40-45 minutes at 180°C (fan), just par boil the potatoes first having previously cut them into dices.

With your hands rub oil over the bird. I used olive oil that was previously preserving sun dried tomatoes.

Mix the par boiled potatoes with oil, chopped garlic, rosemary and black pepper then stuff some inside the bird’s cavity and the rest in the pan.

Once cooked place the bird and vegetables on a warm plate and cover with foil.

Meanwhile, drain off excess fat from the pan and add a good splash of white wine, cider or even beer to the pan juices and cook over a hot flame on the hob until it has reduced somewhat. You are making a token gravy.

Serve with greenery of your choice. 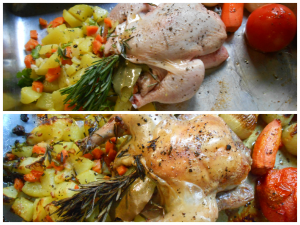