A Weed is But An Unloved Flower

A Weed is But An Unloved Flower

My first year in Spain and this appeared in my (small) garden. 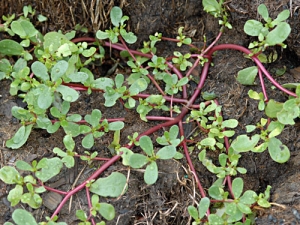 I allowed it to grow not realising what it was, I took a photo and displayed it on Facebook asking for answers which came back as a unanimous “WEED” so I promptly pulled it up and the same in the subsequent years.

Now just by chance, and I love it when things like this happen, I noticed an article about a weed that has more beneficial Omega 3 fatty acids than oily fish. I eat a lot of oily fish but not much by way of weeds. But now that may change.

Common Purslane may be a weed but on further investigation besides the Omega 3’s it is also packed with high levels of vitamin A as well as vitamins B and C. And if that’s not enough it is a powerful anti-oxidant with traces of iron, calcium and magnesium too.

So why are we not eating it I think to myself.

Well, it seems that parts of the Middle East and Asia are not averse to eating the leaves and use them in salads, stir-fries or cooked like spinach. And much closer to home the Greeks use it in salads and stews. With the economic crisis there may be some who have no choice.

And I should have guessed that it is used in Chinese medicine for snake bites, stings, diarrhoea and haemorrhoids!

However, there is possibly good news for me and no doubt plenty of other too as my blood pressure is border line and my doctor is itching to prescribe a pill to counter it. A friend in the USA pointed out that American research has shown the weed contains substances that lower blood pressure as well as cholesterol. She also pointed out that it has only 15 calories per 100g but we are not worried about that, are we?

Apparently, a single plant can produce up to 50,000 seeds and stay viable in the soil for up to 40 years so we should really be overrun with them.

I am looking forward to Purslane profusely growing in my garden together with the herbs, tomatoes, peppers and chillies. Viva weeds!