This is actually based on Delia Smith’s Chicken Basque and it is not too far removed from the original, except it was created in Andalucía and cooked in Lancashire. I have been cooking this wonderful peasant recipe since I cannot remember when, it is adopted and adapted.

And it is was requested by my little sister when I stayed with her and Andy recently during a quick trip back to England.

This is based on what was in the fridge and cupboard – serves 4.

Unfortunately there were no olives in the house nor oranges so we went without olives and made do with a tangerine.

In a large pan lightly brown 8 chicken thighs in olive oil (don’t skimp on the oil, you can drain some off later) over a low to medium heat. Set aside when done.

Add sliced chunky chorizo to the oil which will release its fat and flavour colouring the oil nicely. When lightly browned remove and set aside.

Drain off some of the oil if you think there’s too much.

Turn up the heat a little then add two chopped onions, one or two sliced carrot and two chopped red peppers stir frying them as you want the edges to brown a little.

Add paprika and stir, then tomato puree mixing that through too. Add a good grind of black pepper (I don’t bother with salt there’s plenty in the sausage). Also, if there’s some ‘use me or lose me’ saffron in the store cupboard then sprinkle a few stands into the pot.

Add the rice, throw in a few bay leaves and stir gently so that all the grains are coated in oil.

Add white wine and when it has started to bubble then add the stock so that the rice is submerged.

Place the chicken over the top and lodge segments of orange between the chicken together with a few olives (if your sister has some)… finally sprinkle over fresh thyme and another grind of back pepper. Bring up to a boil and as soon as that is reached boiling turn it down as low as possible. Cover with a lid and don’t remove it until 50 minutes has elapsed.

With the carrots, tomatoes and herbs it isn’t necessary to serve it with anything else making this a great one pot. 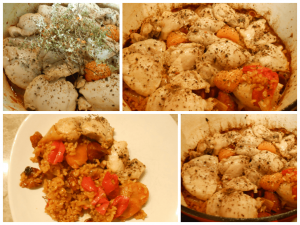 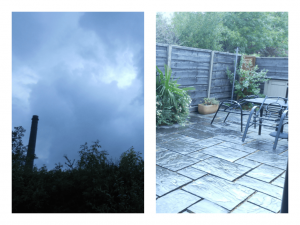 Lancashire in the rain