I love cheese and Wallace & Gromit. I love Wensleydale too but a crumbly or creamy Lancashire is right up there with Cantal, Canadian Cheddar and Manchego in my cheese nirvana and I haven’t even started on goat’s cheese yet.

After living in Andalucía for the past 3 years I had forgotten about the crumbly and creamy cheese produced in Lancashire, in fact there are three varieties: creamy, tasty and crumbly. Tasty is matured and the other two are young. Three short years and I had forgotten; how did that happen?

There’s evidence that Lancashire produced cheeses from the 13th century onwards and in the 1600s it was transported by river to London. Production and method was standardised in the 1890s and is still adhered to today.

And as my 5 days in Ramsbottom comes to an end then what better way to end it than with Lancashire creamy on toast. Perfect. 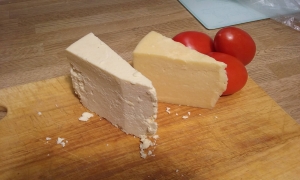