A mojito is a cocktail of Caribbean origin consisting of rum, lime, sugar and mint.

Put together pirates, rum, the sugar industry and the slave trade and there you have the origins of Mojito.

It is claimed that during the 16th century Queen Elizabeth’s golden boy Sir Francis Drake was involved in the creation of El Draque, Spanish for The Dragon which today is called mojito and probably a corruption of mojo a drink made by African slaves. However, whilst I agree that Drake was almost certainly the creator of the original mojito it was actually another Drake, Captain Richard Drake.

Mojitos were made famous by Ernest Hemingway, who enjoyed them at La Bodeguita del Medio in Havana, Cuba. And more recently by heavy advertising campaigns by Bacardi.

To make the perfect mojito you need:

It helps if you have a cocktail shaker otherwise use a sturdy glass as you have to muddle (mix) the lime juice, mint leaves with the sugar first before adding crushed ice over which you pour the rum and then soda water finishing off with a dash or two of bitters and a quarter of lime.

Tastes best when the sky is blue and the weather is hot and I love them. 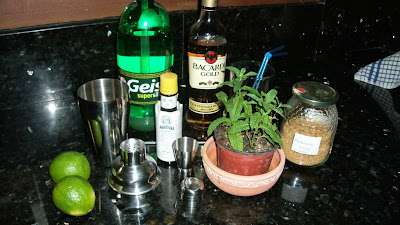