I haven’t posted too much lately but I have been rather busy and don’t worry I haven’t stopped cooking, I just haven’t had time to blog about it. Despite my hecticness I still managed an Andaluz fish stew the other night, I’m not sure it is actually authentic but it was cooked in Andalucía.

Anyhow, whilst out shopping recently I procured some of my favourite sausages here in southern Spain – pork and herb. To be honest I don’t miss too much about British food but when it comes to a sausage, well, these are pretty comparable. Not quite up my ex butcher’s Welsh Dragons but very tasty anyway. They go well in a sausage casserole.

First up, rinse and then boil the pearl barley for 10 minutes. Drain and set aside.

Rinse the red lentils then set those aside too.

If you don’t have semi sun dried tomatoes then use sun dried instead but soak them in hot water first. If you haven’t either I’d question why you don’t dry them yourself, either in the oven or in the Andalucían sunshine.

Slice your sausages into thumb sized pieces and brown in a frying pan (needs a lid later) in a little rapeseed oil. When done remove and set aside.

Meanwhile, peel some shallots (keep them whole), a carrot (sliced) then add those to the frying pan. When they have both started to caramelise then grate over a clove of garlic and a whizzed up ñora pepper, stirring everything.

Now add back the sausages and the pearl barley making sure to give the barley a good coating of oil.

Turn up the heat then add a good glug of dry white wine and cook it out before adding a tin of chopped tomatoes.

Add the lentils giving everything a good shake, turn down the heat to simmer, place the lid on and leave for 30 – 40 minutes or until most of the liquid has been absorbed. 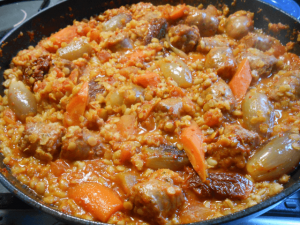