This Sliding Bar can be switched on or off in theme options, and can take any widget you throw at it or even fill it with your custom HTML Code. Its perfect for grabbing the attention of your viewers. Choose between 1, 2, 3 or 4 columns, set the background color, widget divider color, activate transparency, a top border or fully disable it on desktop and mobile.
+34 627 896 504|enquiry@theflexiblechef.co.uk
Previous Next

The Via Verde Aceite de Jaén – Part I

The Vía Verde de Jaén is the old railway line which used to transport olive oil from Jaén to the coast, originally built between 1882 and 1893 which closed in 1985. It is close to where I live. The path is now asphalted or covered in packed grit covering 55km between Jaén and the Guadajoz river, a natural border between the provinces of Jaén and Córdoba where it joins the Vía Verde of the Subbética.
The route starts in Jaén and passes by the towns of Torredelcampo – Torredonjimeno – Martos and Alcaudete.
One day in November 2012 I joined friends, Steve and Steffi with my neighbour’s son Ruben to search for the Roman Bridge on the via verde. We set off from Alcaudete old train station heading north towards Martos. It was good for us three English people to have Ruben as our guide as he spoke a little English and could explain the names of the trees and plants to us. 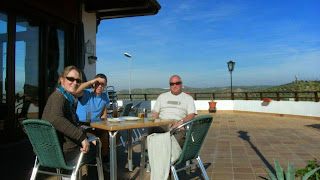 The weather was great, the views were spectacular and we found the bridge after several kms. And after the walk there was time for a couple of beers and tapas.

And Eddi Fiegel, of The Guardian wrote: Joggers in wraparound shades chugged past the bricked-up, graffiti-covered, 19th-century Martos station, and on the start of the path we encountered a few posses of cyclists and the odd dog-walker – but these were the last signs of human life  we’d see for the next five hours.

And that’s exactly how it is but on this day we walked in the opposite direction.