A Potted History of my Viking Connections

A Potted History of my Viking Connections Phil

I have traced my ancestry through various lineage from Scotland to England, across the channel into France, Belgium and Germany via kings and queens eventually arriving at Kvenland (Kænlandi). The year is 160.

This journey is not precise chronology, relying sometimes on mythology as depicted by my 57th great-grandfather, Fornjót, King of Gotlandi, Kænlandi and Finnlandi (160-250). He was an ancient giant who together with his wife, Gonnor Gorrettsdatter (160-220), produced three sons. One of Saturn’s moons is named after him.

Kvenland (Kænlandi) was a region of parts of today’s Finland, Sweden and northern Norway. My ancestors played a part in naming the countries we now know as Norway and Denmark.

-Dotter, -Datter, -Dottir are all the same ending, meaning “daughter” in Scandinavia, and attached behind the father’s first name.

According to the Sagas, sons of Fornjótr were given powers to rule over forces of nature.

56th great-uncle: Kåri inherited the kingdoms of Kænlandi and Finnlandi from his father and ruled as king

In a tale at the castle of giant Útgarða-Loki in Jötunheimr (home of mythical giants) Logi was challenged to an eating contest against Loki. Logi won when he not only ate the meat but the bones and the wooden tableware.

In another saga because Logi was larger and stronger than any other man in the land his name was lengthened from Logi to Hálogi and from that name the petty kingdom was called Hálogi’s-land which today is Hålogaland in northern Norway.

Ægir is also identified as a giant in various sources. 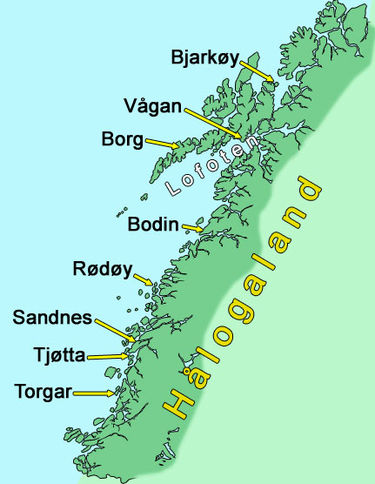 As a side note my DNA result shows that I have a Y-DNA12 match with a distant relative in Sandnes (see map) on my direct paternal line.

Snaer, meaning snow, was born in Kvenland and later became king. He died in Raumsdal which is in modern day Romsdal in Norway.

In 301 in Norway he married Niera Karrasdottir (276–322). They produced three daughters and one son. 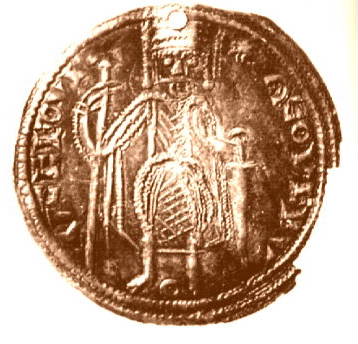 He married Ikutiera (326-365) and they produced three children, two boys and a girl, all born in Norway at Raumsdal.

According to the old sagas Gói went missing and after three years her two brothers set out separately to find her. Nór set off with his men overland on skis and Gór with his men went by ship. Nór went out from Kvenland and skirted the Gulf, and came to that place inhabited by the men called Sami (Lapps); that is beyond Finnmark.

Having travelled for a while, Nór was still “beyond Finnmark.” After a brief fight with Sami people, Nór continued:

But Nór went thence westward to the Kjolen Mountains and for a long time they knew nothing of men, but shot beasts and birds to feed to themselves, until they came to a place where the rivers flowed west of the mountains. Then he went up along the valleys that run south of the fjord. That fjord is now called Trondheim.

Nór eventually met with King Hrólf of the Hill and it was he who had taken Gói captive and kept her as his wife. Nór and Hrólf came to terms and afterwards Nór married Hrólf’s sister. Nór returned to his own lands which ever since has been called ‘Nor’s way’ = Norway.

He ruled over southwestern Norway.

Thránd ruled Trondheim and the surroundings which was named after him.

Halfan was born, married and died in Ringerike, Buskerud, Norway.

He married Almveigu Eymundsdatter in 479 and she bore him nine sons.

Halfdan was a great warrior, and went on forays far and wide in the East.

The Gjermundbu helmet was discovered by accident on a farm in Ringerike in 1943. Later investigation found a burial chamber containing artefacts including weaponry. The helmet was found in 9 fragments and it is the only known Viking helmet capable of reconstruction. 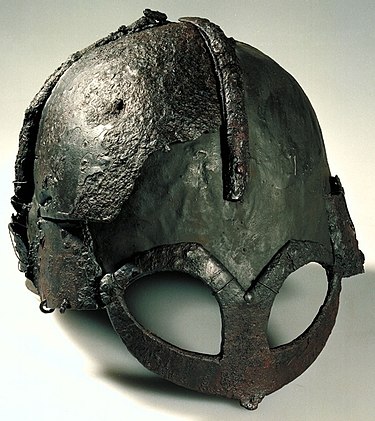 However, it is thought that Ragnar is not one person but amalgamated details from several persons which shows some truth, part myth and invention. However, much is recorded about his famous sons.

Nevertheless, he’ll always be my hero.

He was born at Uppsala, Sweden in 750 and had three wives and a concumbine.

On 28th March 845 Ragnar led a fleet of 120 ships which sailed up the River Seine in March. The French king Charles the Bald, the grandson of Charlemagne, assembled an army to oppose them, but when the Vikings defeated one division, the remaining French forces retreated.

My 38th great-grandfather Björn Ironside Ragnarsson, buried at Island of Munsö, in lake Mälaren, Sweden. Ivar the Boneless Ragnarsson, who died in England at Repton, Debyshire. Sigurd II ‘Snake Eye’ Ragnarsson who also died in England at Northumberland. Halfdan ‘White Shirt’ Ragnarsson, Viking leader and a commander of the Great Heathen Army which invaded the Anglo-Saxon kingdoms of England, starting in 865. He was King of Dublin and died Strangford Lough, Co. Down, Northern Ireland. Lastly, Rognvald Ragnarsson and as there is little information about him, it could be that he died young.

Ragnar died in England at Northumbria. He was thrown into a snake pit by men of King Ælla of Northumbria.

Ragnar’s execution by King Ælla in a pit of snakes. Etching by Hugo Hamilton

It is unsure why he acquired the name of Bluetooth, there are several suggestions but what is true is that the Bluetooth wireless specification design was named after him in 1997.

He was born in 911 at Jelling, Vejle in Denmark.

Harald reigned during a relatively quiet time, however, that didn’t stop him sending his army to France (twice) to aid Richard the Fearless in Normandy in 945/6 and again in 963.

It is claimed that Harald introduced christianity to Denmark around 960, built the largest known bridge In Denmark until 1935, Ravning Bridge (760m length), oversaw the reconstruction of the Jelling runic stones and fortified the fortress of Aros (nowadays Aarhus, capital of Jutland).

“King Harald bade these memorials to be made after Gorm, his father, and Thyra, his mother. The Harald who won the whole of Denmark and Norway and turned the Danes to Christianity.”

The Curmsun Disc was found in Sweden by an 11-year-old schoolgirl in 2014, it is a concave golden disc of a weight of 25 grams and a diameter of 4.5 cms. The Danish Viking king, Harald Bluetooth, is mentioned in the inscription of the disc.

Harald was killed fighting off a rebellion led by his illegitimate son Sweyn Forkbeard at Jomsborg on 1st November 986. Harald is buried at Roskilde Cathedral, Roskilde, Sjælland, Denmark. 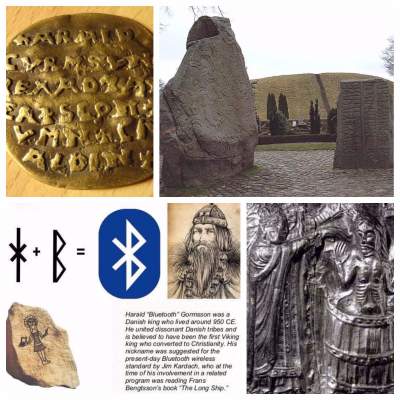 His grandson is my 38th great-uncle, Canute the Great, King of England, born in Denmark and died in England at Shaftesbury in Dorset on 12th November 1035. He is buried at Old Minster, Winchester, England. 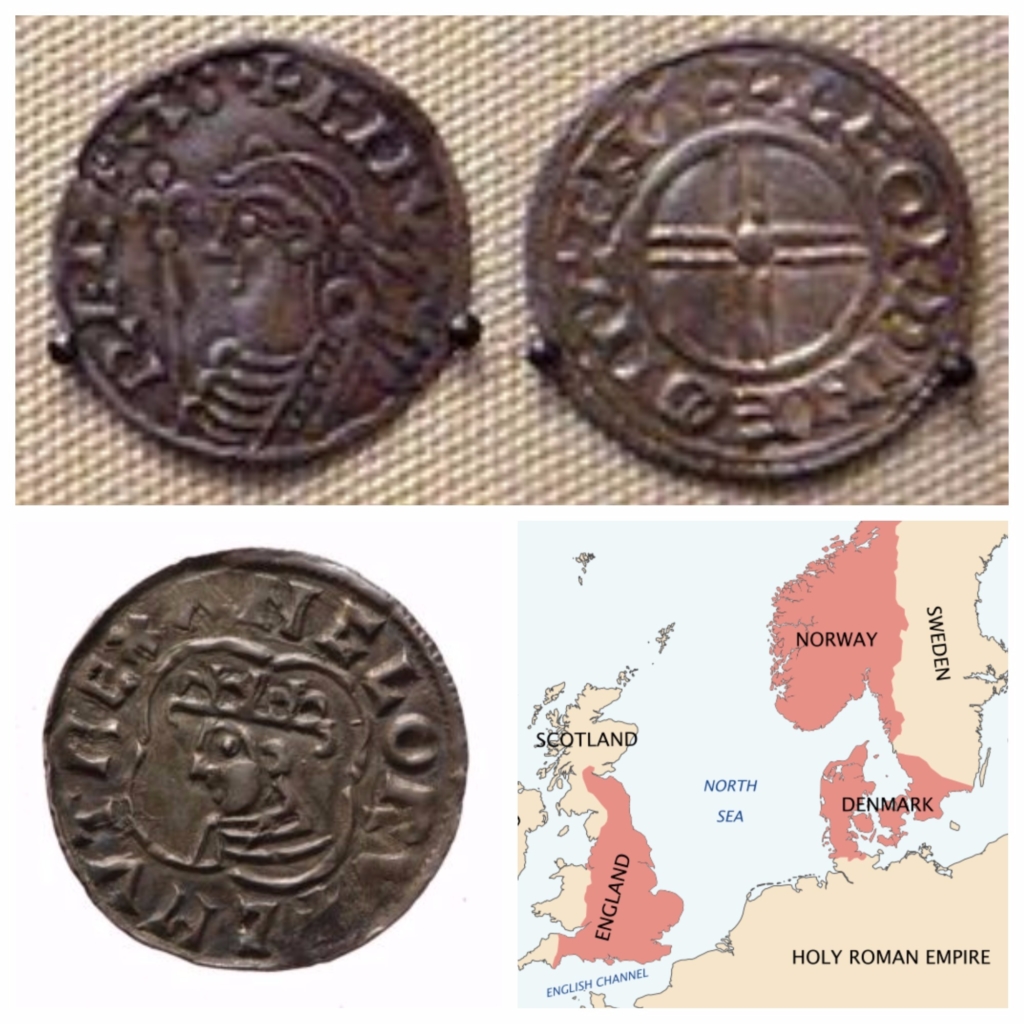 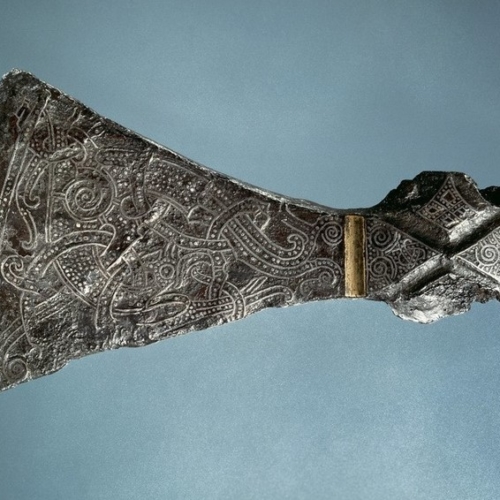 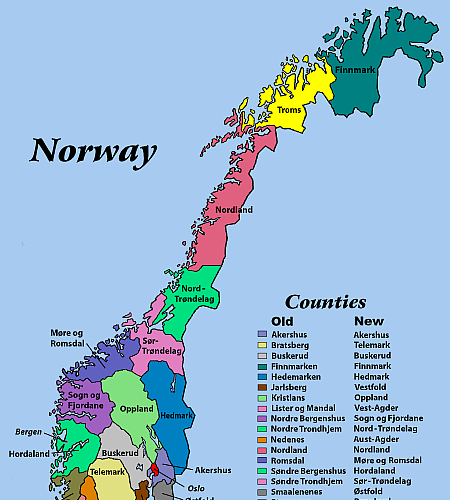 Norway by County (Old and New) 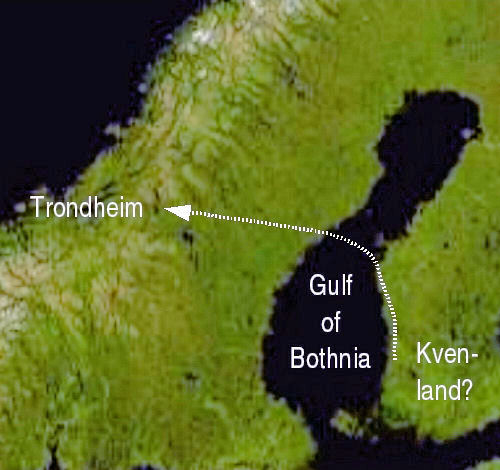 A possible location of Kvenland and Nor's route to the fjord of Trondheim. Kvenland can be placed elsewhere east of Gulf of Bothnia, as well. The selected location on the map is the one with most archaeological finds. Most interpretations locate Kvenland in the less well researched northern coastal area on the Bothnian Bay. 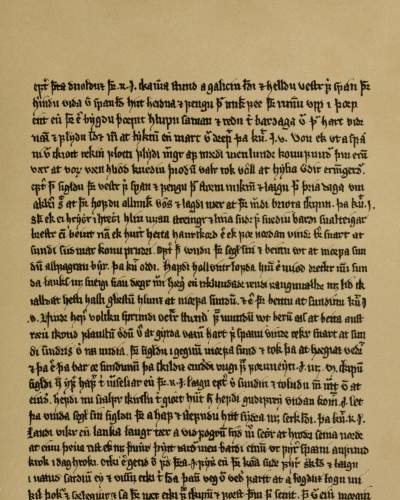 An example of a page from the Orkneyinga saga, as it appears in the 14th century Flatey Book. 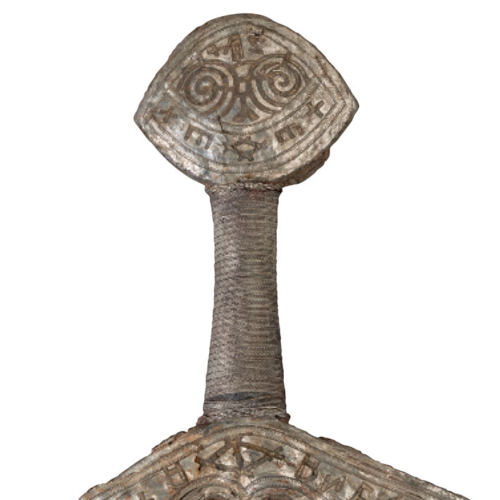 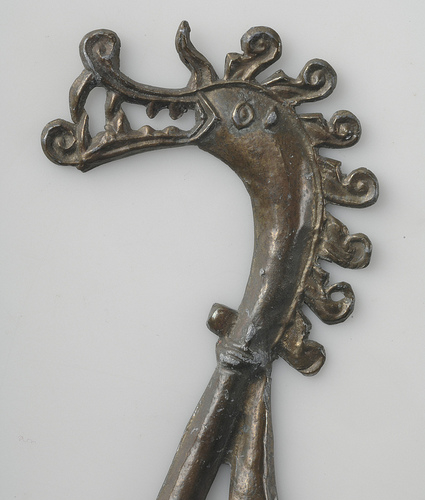 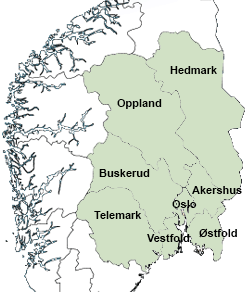