When it is raining in Andalucia it’s time to dive into the kitchen and make use of being stuck indoors. I made use of the remaining celeriac (after making celeriac mash) I found in Granada recently.

Heat a large pan then add the oil and the butter. Sauté, the leeks, garlic, ginger and celery until softened.

Add stock so that everything is covered. Pop on a lid then bring to a boil before turning down the heat so that things simmer.

When cooked add seasoning to taste then squeeze in lemon juice – set aside to cool.

When cool blitz with a hand blender.

Meanwhile, zest a lemon in a bowl, add finely chopped coriander leaves and finely chopped garlic then pour extra virgin olive oil over to create a consistancy suitable for drizzling.

And now the sun is shining. 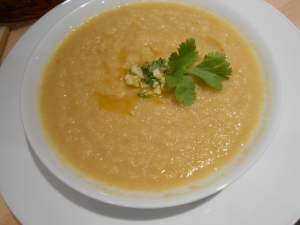