Dobson Family Tree from 1590 to Date

When I started researching my family tree I was totally ignorant of the Dobson connection. A name never mentioned within my family but in 1867 my great-grandfather, Robert Morrison married Isabella Dobson. 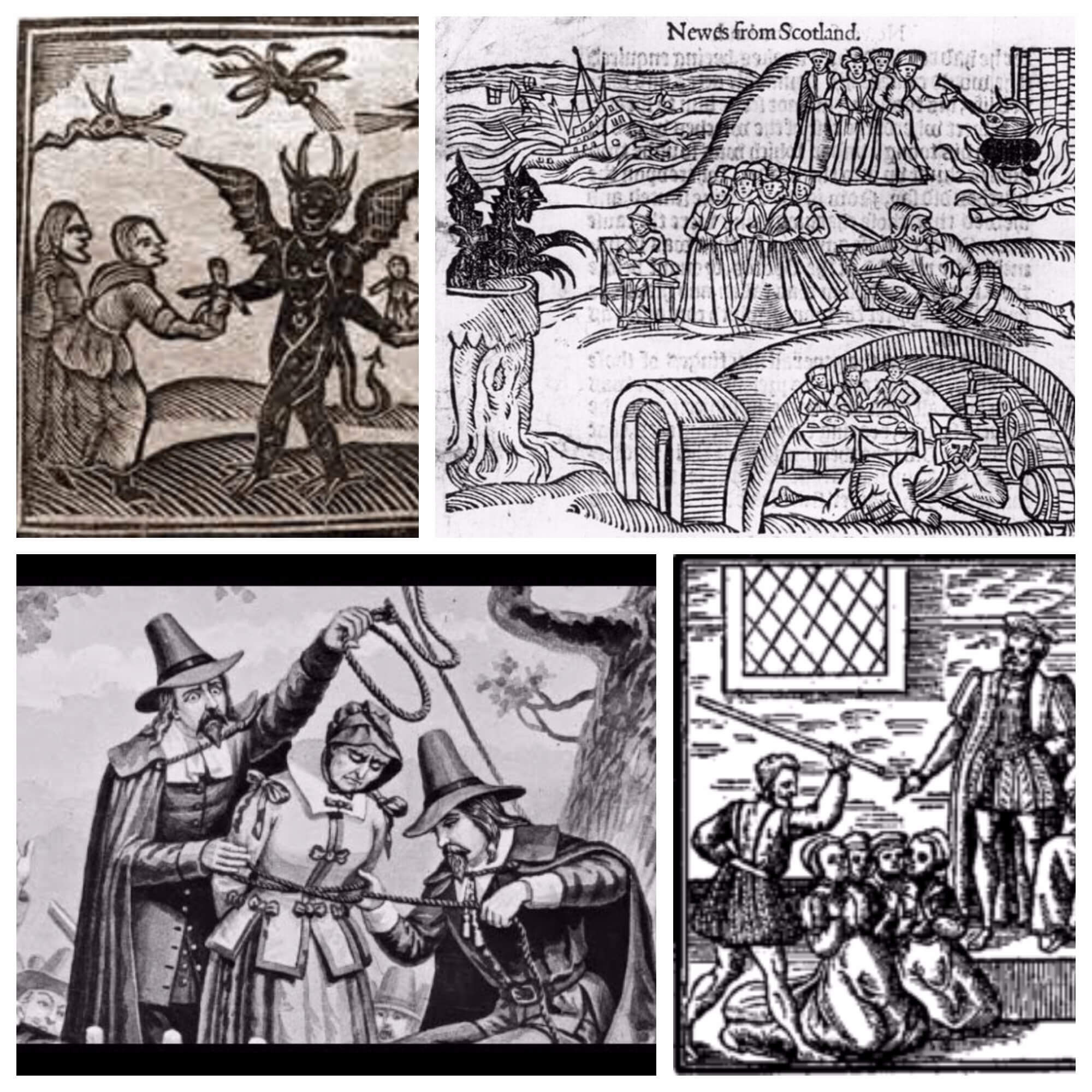 There isn’t too much information about Robert other than he fathered a son, Alexander,  recorded on 1st December 1611 at Canongate, Edinburgh, Midlothian. I have his birth record which shows Alexander Robertson (Dobson) so I can only assume Alexander was given his mother’s surname.

8th great-grandfather Alexander Robertson Dobsone (1611-?)
Born: Scotland
Marriage: Unknown
Spouse: Katherine Thomson
Monarch: Charles I, 1625-1649
Event: St John Ogilvie, a Banffshire-born Jesuit priest, was hanged for refusing to renounce the supremacy of the Pope. He was the only Roman Catholic martyr in Scotland and was canonised in 1976.

Alexander and Katherine produced three sons and two daughters all born and/or baptised in Whittingehame in East Lothian. Katherine was born in 1618 at Prestonpans, East Lothian and baptised there on Monday, 8th October. Her parents were John Thomson (1593-?) and Margaret Chauslie (1593-?).

Whittingehame is situated between the Lammermuir Hills and the Firth of Forth, about halfway between Haddington and Dunbar, 19 miles to the east of Edinburgh.

In 1637 William, my 7th great grandfather was born. He was christened on 24th December 1637. In 1666 (at the time of The Great Fire of London and one year after the Great Plague) aged 28 he married Agnes Wood from Tranent, East Lothian.  They married in Haddington, East Lothian. Her parents are unknown.

In 1650 William may have witnessed the Battle of Dunbar between Cromwell’s Parliamentarians and Scots that were loyal to the new monarch, Charles II. 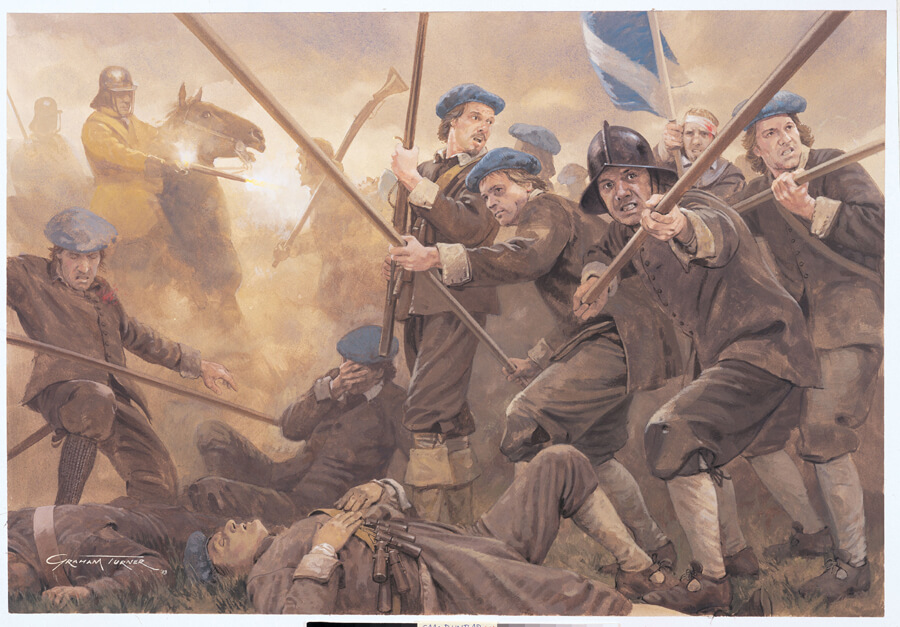 Battle of Dunbar by Graham Turner

Alexander was born on Friday, 29th April 1667 and christened on 5th May. Witnessed by Thomas Koddie and John Wood.

Alexander and Isobell produced seven children, all born and/or baptised in Whittingehame.

In Scotland during these times females could marry from the age of 12 (yet 14 for boys).

He no longer had to worry about going to war against a neighbouring nation following the union of England and Scotland (Acts of Union 1706-1707).

Unknown Dobson was born on 2nd September 1722 and as he was unnamed I assume he died in childbirth.

James Dobson was born on 22nd January in 1727 at Galashiels. He married Agnes Veitch at Traquair, Peeblesshire on 9th February 1750.

Now, here’s a tale: I spent hours on this Veitch/Veatch/Vetch puzzle as James’ father also married a Veitch. It turns out that James’s mother, Isabel, and Agnes’s father, Walter, were brother and sister making this a marriage of first cousins (and doubling all data for preceding generations).

Alexander was born on Monday, 4th August in Galashiels and baptised there two days later.

They produced three boys and a girl, all born and/or baptised in Galashiels.

He was born in the same year as when the British government was administered by Robert Walpole, the first prime minister. Alexander and Elizabeth would have witnessed England defeating the Scots in 1746 under Stuart Pretender Prince Charles at Culloden Moor. It was the last battle fought on British soil.

George was born on Sunday, 24th November in 1765 at the same time as James Watt who invented the steam engine. George was a weaver.

He would have been aware of the news that in 1787 The Constitution of the United States was signed.

George and Jean had four children.

In 1841 the family lived at Dunsdale Haugh in Selkirk where he was working as a wool spinner possibly at Roberts of Selkirk, renowned for their fine Scottish tweeds.

By 1851 George and family have moved 5 miles away to Ladhope Bank, Galashiels where he is working as a Yarn/Wool Worker.

In 1861 he is a Foreman at a woollen factory and living at 4 Overhaugh Street a mere ½ mile from Ladhope Bank with his wife, daughter Jessie, aged 16 and her son James Dalgleish, 9 months.

George’s death certificate in 1864 records he is back at Ladhope Bank and his occupation is a Machine Manager. Five months later Jessie married James Freer (1841-1914) in Ladhope.

By 1851 George is a foreman at a woollen factory and living at Rothes Mill, Kinglasse, Fife with his wife and family. He is employed by David Dobie & Son at Rothes Wool mill.

In 1861 the family are living at Sparrow Mill Cottage, Kinglasse. George is Foreman at a woollen mill. William has moved out.

Another decade later in 1871 the family have moved to 3 Bridge Street, Melrose and George is recorded as a mill worker.

He died aged 73 at 68 High Buckholmside in Ladhope in 1881 on 31st December at 5.30pm of Apoplexy. His son William recorded his death. 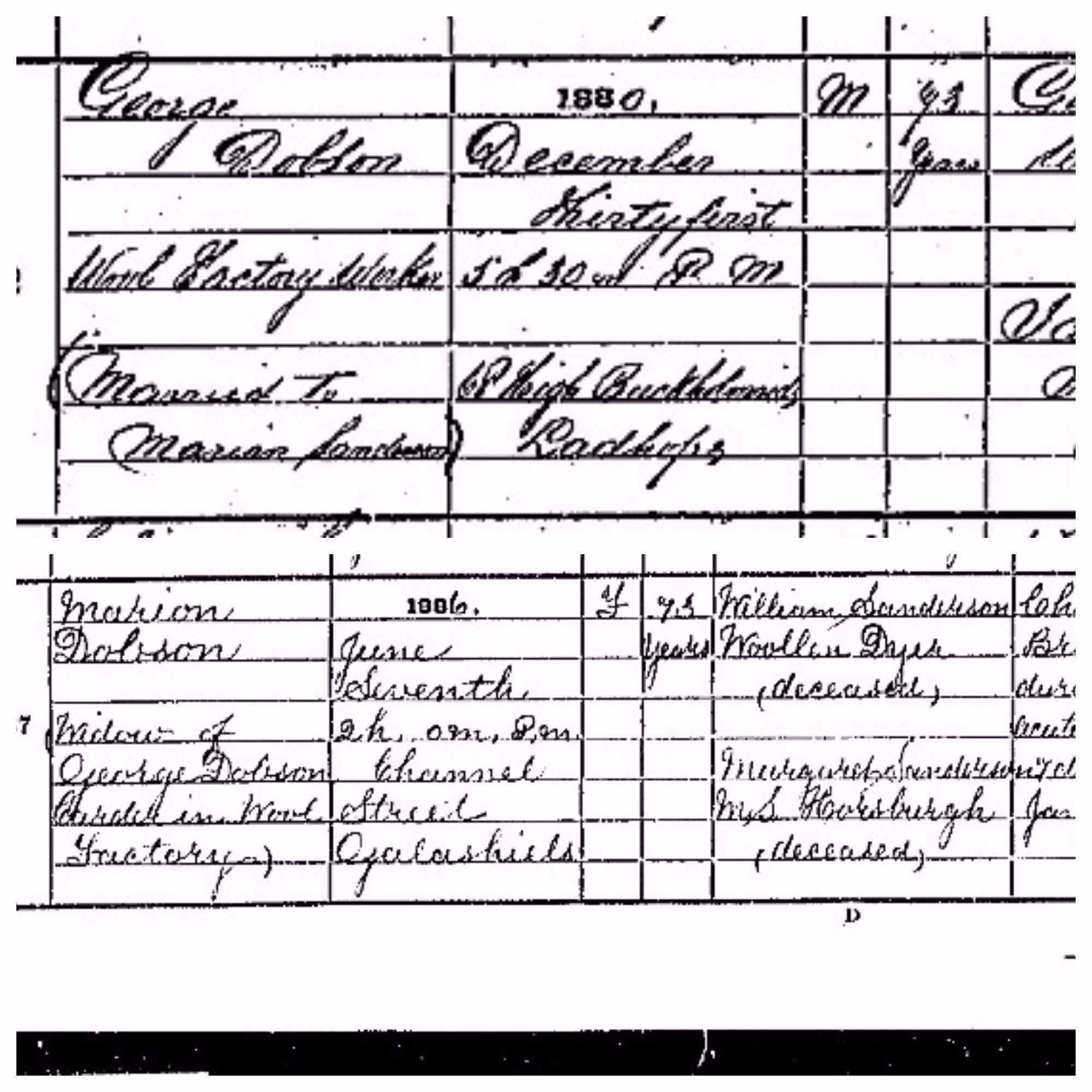 In 1861, aged just 15, George’s son, William, left home and took up a position as a draper’s assistant at Miss Readdie’s shop at Kinglassie. He boarded at her home at 12 Burleigh Street, Kirkcaldy.

Ten years later he is now boarding at 163 Crown Street in Govan (Glasgow) with the Porteous family. He is now a draper.

Within one year they are living at nearby Ladhope in Melrose where the census of the time records William’s occupation as draper employing 3 males and 6 females.

By 1886 William has a shop at 34 Fountain Place in nearby Loanhead located south of Edinburgh where he operated his business until 1891. The property is now The Mayflower pub. 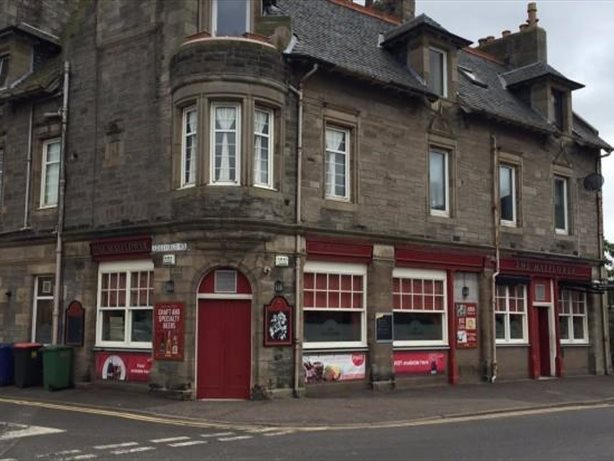 In 1891 the family are living at Hawthorn Gardens, Loanhead.

A few years later William has moved his drapers shop a few hundred yards up the road to 46 Clerk Street which today is the business of One to One Beauty Therapy.

Around 1896 the family move home to Gowanlea, The Loan in Loanhead, a property previously occupied by a James Wilson. The whole family were still living there in 1901.

Business is good for William as in 1900 he acquired the premises at 113-115 Clerk Street and presumably the goodwill of James Crook’s business who was also a draper. William remained at these premises until at least 1908 trading as Wm Dobson & Co.

William died at 11pm on 4th March in 1928 at St Michael’s, Townsend Place in Kirkcaldy of cerebral haemorrhage. Marian S Dobson, his daughter, registered his death.

They lived in Galashiels at Bank Street and George worked as a weaver.

James and Isabella produced four girls, all born in Galashiels whilst living at Bank Street.

James died an accidental death (concussion of the brain) on 28th May 1855 at Bank Street and was buried in Galashiels graveyard leaving his widow and three daughters living at 30 Bank Street.

In 1871 George’s widow is living at 19 Greenbank Street, Galashiels together with widowed daughter Jane, Margaret and granddaughter Alison (Alice) Wilson.

By 1881 Isabella’s granddaughter has died of croup at 22 Greenbank Street on 12th January 1874 and her daughter Jane lives with her at 21 Greenbank Street. Ten years later is situation is the same.

Robert was born on 3rd December 1873 at Larbert, Stirlingshire and died of cerebral haemorrhage on 27th August 1944 at 414 Main Street, Stenhousemuir.

George was born in 1879 at Rotherham, South Yorkshire. His death is unknown.

John was born on 1st September 1882 at Bonnybridge, Falkirk, Stirlingshire. He died on 10th April 1960 at 41 Main Street, Stenhousemuir. In 1871 Isabella and Robert are living at 33 Croft Street, Galashiels with Bella and Archibald. Ten years later they are living at 126 High Street, West Bromwich, Staffordshire where Robert is an iron foundry manager.

By 1891 the family have moved back to Scotland and are living at Moir Villa, South Road, Larbert. There is no sign of Bella who would be 23.

In 1901 the family are still at Moir Villa. Bella is still not around and Archibald is married to Helen Blackie Steel (1876-1966) and living at 29 Kerr Street, Glasgow.

Isabella died at Mitchells Land in Stenhousemuir at 11.59pm on 15th September in 1931 of arteriosclerosis. Son, Robert, registered the death. 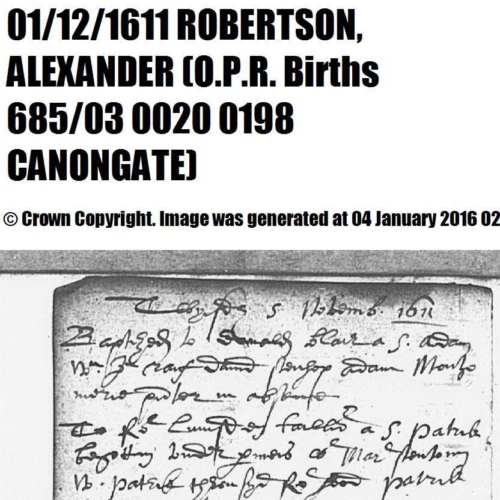 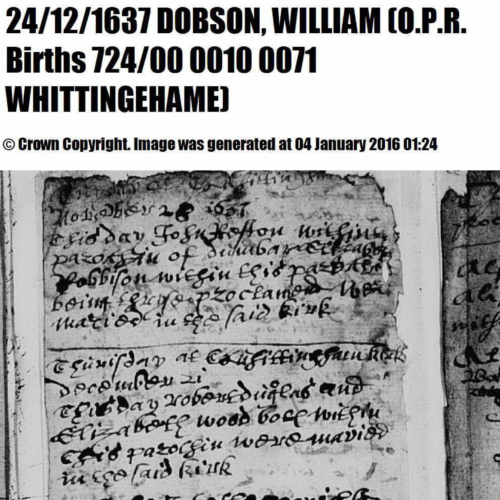 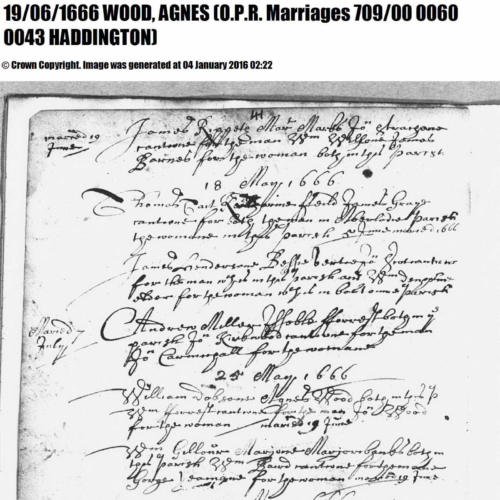 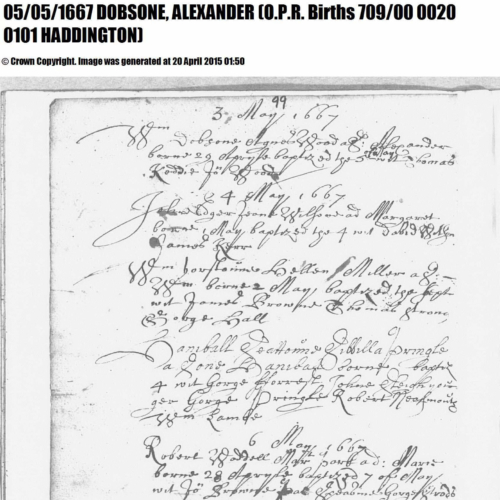 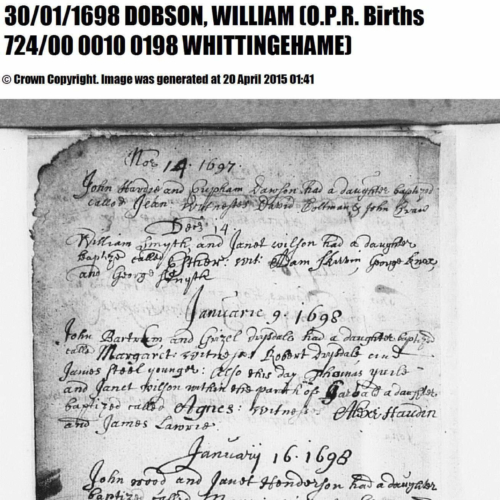 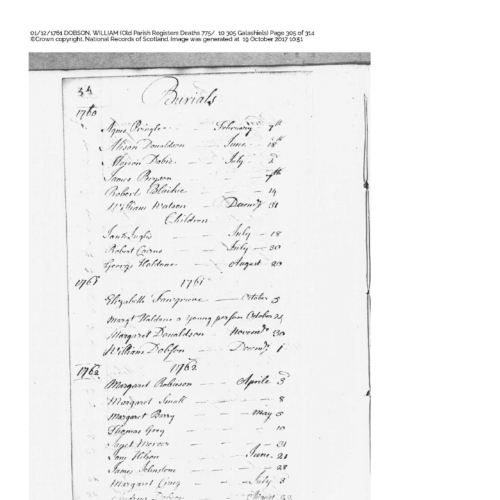 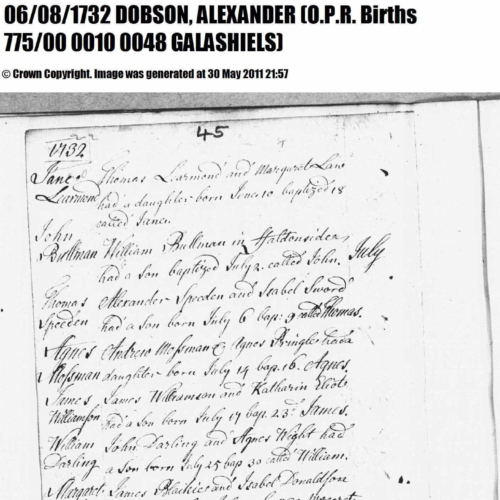 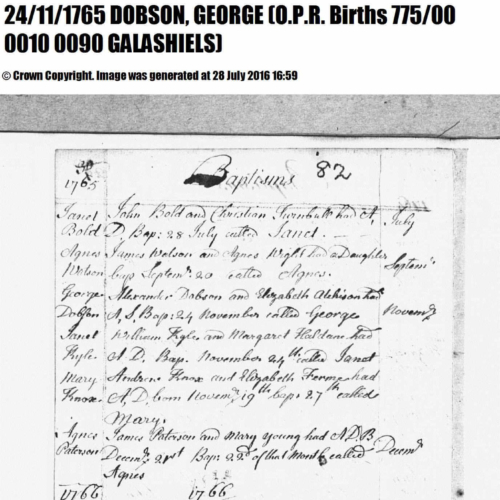 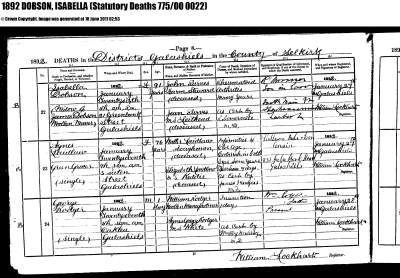 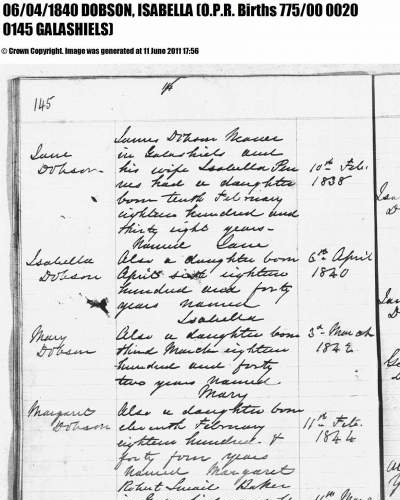 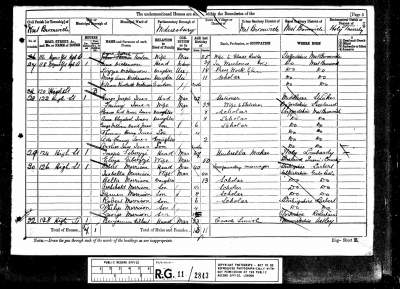 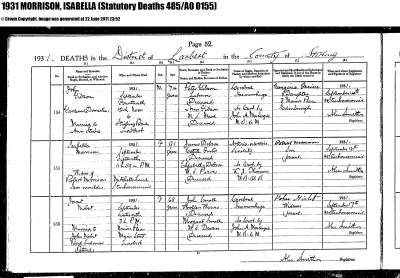