Kabargah is usually made with mutton or goat ribs and often forms part of a celebratory meal in Kashmir but for me it was a mid-week supper made with pork ribs but living in rural Andalucía it’s not so easy to pop out and buy lamb ribs or sometimes lamb itself unless you want a whole one.

Kashmir is a disputed region between Pakistan, India and China so whilst there’s still turmoil, unrest and the occasional war, food doesn’t seem to suffer. Here’s one dish from the region.

In a bowl mix the spices and salt with the yoghurt and set aside.

Bring a saucepan of water up to a boil then add the ribs. Keep at a rolling boil and skim off the foam that floats to the surface. They’re done when no further foam is produced.

Rinse the ribs and place in a clean saucepan. Cover with milk topping up with water if necessary and bring up to a boil.

Now add the spices and salt and allow simmering until the milk has virtually evaporated and the ribs are fork tender.

Drain the ribs over a rack discarding the star anise.

Dip the ribs in the yoghurt mixture.

Heat up the ghee in a korai/wok/frying pan and fry the ribs in batches until they are crisp and golden.

This recipe also works with chops. 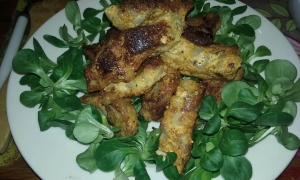