I’ve gone on before about goat meat, Mauritian Goat Curry, for example, and on this occasion it is yet another spicy delight. However, this time my cabrito came from Paco in the village, not Carrefour.

As 70% of the male population of my village (and no doubt every other Andalucian town and village) are called Paco then they tend to have nicknames. This particular one is known as Paco The Taskmaster because when he’s not breeding dogs or rearing goats then he is in charge of a gang of olive workers – and he works their fingers to the bone. Apparently.

He also has a reputation for not paying his debts and being an all round crook.

But taking people as I find them I think he is a bit of a lovable rogue, not that I love him but I do like him so much so that I’ve bought logs for my wood stove from him also. As usual he says, pay me when you see me next… I like that.

I travelled around India last year and spent some days in Rajasthan. You can view my 32 day rail journey around India at Trainspotting. So having goat meat in the fridge I decided to cook this:

The ribs are marinated in a combination of Greek yoghurt, ginger, garlic and spices, overnight.

Then everything is slow cooked adding root vegetables of your choice (turnip and carrot in my case).

Cut up a rack of ribs and place in a bowl with the following marinade ingredients:

Mix with your hands, cover, then place in the fridge overnight.

Slice one onion finely and saute slowly in a pan with ghee and a pinch of brown sugar until transluscent and golden.

Meanwhile, whizz more garlic cloves and a knob of fresh ginger into a paste. When the onion is done add that to the whizzer also and give one final blitz so that you have a wonderful and fragrant paste.

Add more ghee to the pan then throw in a cinnamon stick, some cloves, a few green cardomon pods and two black cardomon pods as well as some nigella seeds. Shake the pan until the spices release their aroma.

Scrape off most of the marinade from the ribs then add them to the pan to brown.

Add a chopped onion and stir for a few minutes before adding the garlic, ginger and onion paste.

Now is the time to add your root vegetables. Stir to give them a good coating.

Grate over some nutmeg and add a couple of tablespoons of mango chutney. Stir.

Cover with stock of your choice. I used veal.

Bring the pan up to a boil then immediately reduce the heat so it produces a simmer – leave covered on the top of the stove until the meat is falling off the bone.

Towards the end of the cooking period add chopped coriander or parsley stalks, squeeze of lime juice, pinch fenugreek leaves and white pepper. Add salt if you wish.

Note: If the sauce is not thick enough then add some of the marinade one spoonful at a time. 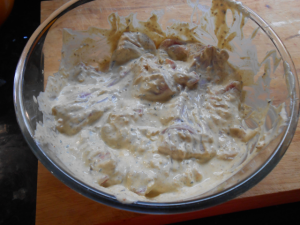