In 1877 my great-uncle Joseph Young Webster was born on 31st January at 41 Baltic Street in Montrose to John Webster (1841-?) and Agnes Young (1842-1921). The property is opposite the church graveyard and within sight of the steeple of Old and St Andrew’s Church.

The 1881 census shows that he is still living at 41 Baltic Street, (now a ‘C’ listed building) with his parents and three brothers, James, David and Charles.

At the age of 14 he lived at 4 North Street, Montrose with his parents, James and his sister (Agnes, my grandmother). He was working as an Apprentice Grocer.

However, by the age of 17 he has joined the Cameron Highlanders (No. 3605) having enlisted at Inverness on 9th June 1894 for ‘Short Service’ – 7 years with the Colours and 5 years in the Reserve.

His age is shown as 18 years 4 months and his occupation is stated as a grocer.

His enlistment record shows he was 5’7 ¾” tall, weight 137lbs with a fresh complexion, grey eyes, dark brown hair with a birth mark on left side of neck. His religion was noted as Presbyterian.

His medical took place on the previous day at Perth where he was declared fit for the army by David Leslie, MD.

Joe’s war history was colourful and he was highly decorated receiving medals whilst serving in the Nile Expedition in 1898 including the battles of Atbara and Khartoum. He received The Khedives Sudan medal with clasps and The Sudan medal (Queens).

Then in 1900 he saw campaigns in South Africa (Boer War) including the battle of Diamond Hill when he was awarded the South African clasps for:

A clasp inscribed “Johannesburg” will be granted to all troops who, on May 29th, 1900, were north of an east and west line through Klip River Station (exclusive), and east of a north and south line through Krugersdorp Station (inclusive).

A clasp inscribed “Diamond Hill” will be granted to all troops who, on June 11th or 12th, 1900, were east of a north and south line drawn through Silverton Siding and north of an east and west line through Vlakfontein.

A clasp inscribed “Wittebergen” will be granted to all troops who were inside a line drawn from Harrismith to Bethlehem, thence to Senekal and Clocolan, along the Basuto border, and back to Harrismith, between July 1st and 29th, 1900, both dates inclusive.

A clasp inscribed “Cape Colony” will be granted to all troops in Cape Colony at any time between October 11th, 1899, and a date to be hereafter fixed, who received no clasp for an action already specified in the Cape Colony nor Natal clasps.

After discharge he worked at Academy Park Flour Mills in Montrose as a labourer and later as a carter.

On 8th June 1907 Joe married Margaret McDonald who was living and working as a Servant in Rayne in Aberdeenshire. They married at United Free Church, Market Street, Insch, Aberdeen. Their witnesses were William and Isabella McDonald (her brother and sister). Her parents were Alexander McDonald and Margaret Hay.

In 1907 Joe’s occupation is recorded as a woodcutter and he is living at Woodside of Dun, Montrose. Margaret is a domestic servant and living at Market Street, Insch. How they come to meet is unknown.

By 1911 the family are living in a 4 bed-roomed house at 17 Murray Lane, Montrose. The Mitchel family share the house. I am sure Joe and Mr Mitchel would be flabbergasted if they were told that one hundred years later the property would be valued at £180,000. It is a beauty salon today.

By 1914 the family are residing at 19 Whites Place, Montrose and one year later it is where Margaret receives the news of Joe’s death.

After a short period out of the regular army, working as a carter and living at 19 White’s Place, Montrose but connected with the Territorials for about 5 years, he enlisted in 1914 with the 5th Battalion Black Watch (Royal Highlanders) “C” Company and attained the rank of sergeant Reg. no.1214.

Joseph served during the Great War when the Christmas Truce took place in 1914 on the Western Front.

Joe’s war record shows he was killed in action on Sunday 9th May 1915 at Aubers Ridge, south of Armentières, France, close to the Belgian border.

There were around 12,000 casualties and losses that day. This battle was an unmitigated disaster for the British army as no ground was won and no tactical advantage gained.

According to the Scottish National War Memorial they record Joseph’s death as 1st November 1915, however, it is possible a transcriber messed up by mis-recording  the entry into war which was on the 1st November 1914.

His war gratuity was £6.

Extracted from: Montrose, Arbroath and Brechin Review, 21st May 1915.

The death of Sergeant Joseph Webster, White’s Place, Montrose, of the 5th Black Watch.
He took part in the great battle at Ypres on Sunday, 9th inst., and was killed instantaneously by shrapnel. Official intimation was received on Saturday, and sympathetic letters have been received by Mrs. Webster from the Chaplain and Lieutenant, He leaves a family of two girls, who are aged six and eight respectively. Sergeant Webster, who was 38 years of age, had seen a good deal of warfare. he enlisted in the 1st Cameron Highlanders when he was eighteen years of age. After training for some time in this country he proceeded on foreign service, Gibraltar being his first station, and afterwards Cyprus. He took part with his regiment in the Egyptian War, being engaged in the battles of Atbara and Omdurman. Shortly after the Boer War broke out, and while at Cairo, the Camerons were dispatched to South Africa, and Sergeant Webster went through the greater part of the war, remaining with his regiment till after the close of hostilities. Through these two years he passed practically without a scratch. He had four medals, with eight clasps. His seven years, the period for which he enlisted was out while he was in Africa, so that the five years of his reserve service was entered upon, his period in the regular army before he came back to this country in September being about eight years. Returning to Montrose he was for some time employed at Academy Park Flour Mills, and after as a carter. He joined C Company (Montrose) of the Black Watch (Territorials), with which he had been about five years, and although he had already gone through two campaigns, he was ready to take part in a third when duty called. He proceeded with the 5th Black Watch to France last autumn, and while there rose to the rank of sergeant. Being an old campaigner he was of great service to his company and battalion, and was greatly esteemed by his comrades.

HEAVY CASUALTIES AMONG MONTROSE MEN.
REGULARS AND TERRITORIALS SUFFER IN THE FIGHTING.

Montrose regulars and the Territorials of the 5th Black Watch have suffered heavily in the recent fighting at the front. The wife of Sergeant Joseph Webster, 19 White’s Place, has been indirectly informed of the death of her husband, who was an ex-regular, and had served through the Egyptian campaign and the Boer War with the Cameroon Highlanders. He had been about five years connected with the Territorials, and followed the occupation of a carter before going on service with his company.

His remains are probably buried in an unmarked grave at Aubers Ridge British cemetery.

Within 13 months Margaret died at the Royal Infirmary in Montrose on 22nd March 1916. Family say that she died of a ‘broken heart’. Their two children, Margaret (Peggy) and Agnes (Nan) were raised by my grandmother.

The brown door at the top of the stairs is number 43, number 41 is presumably accessed through the alley. Overgrown graveyard but you can still view the steeple (just). 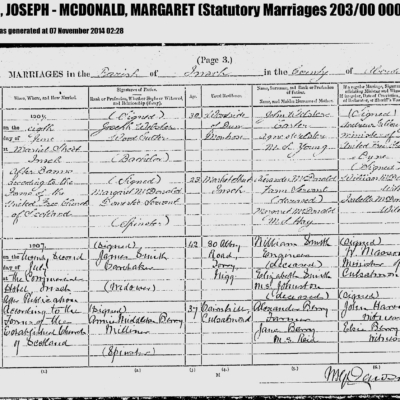 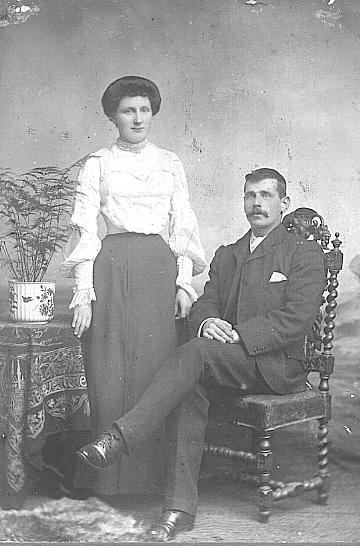 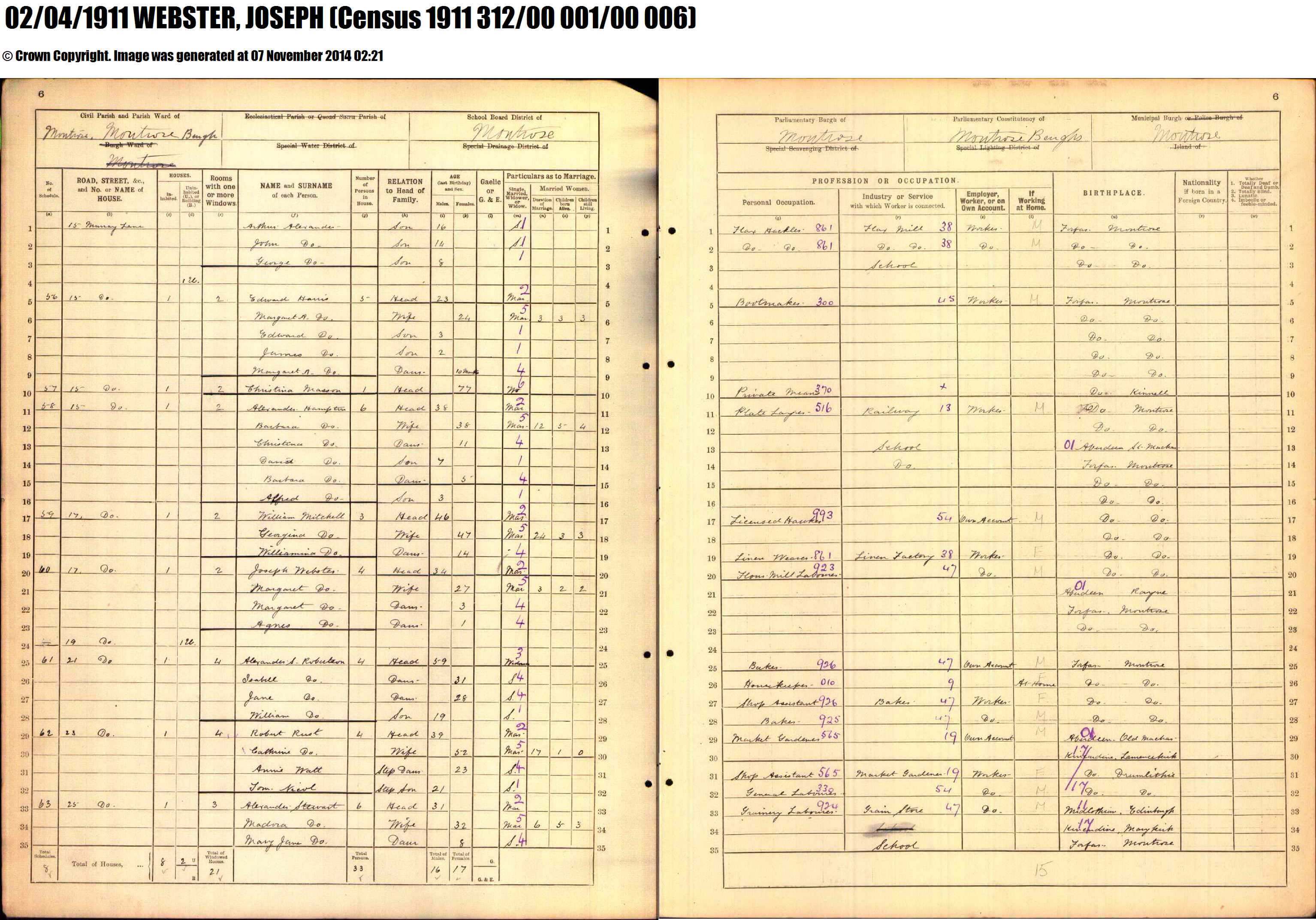 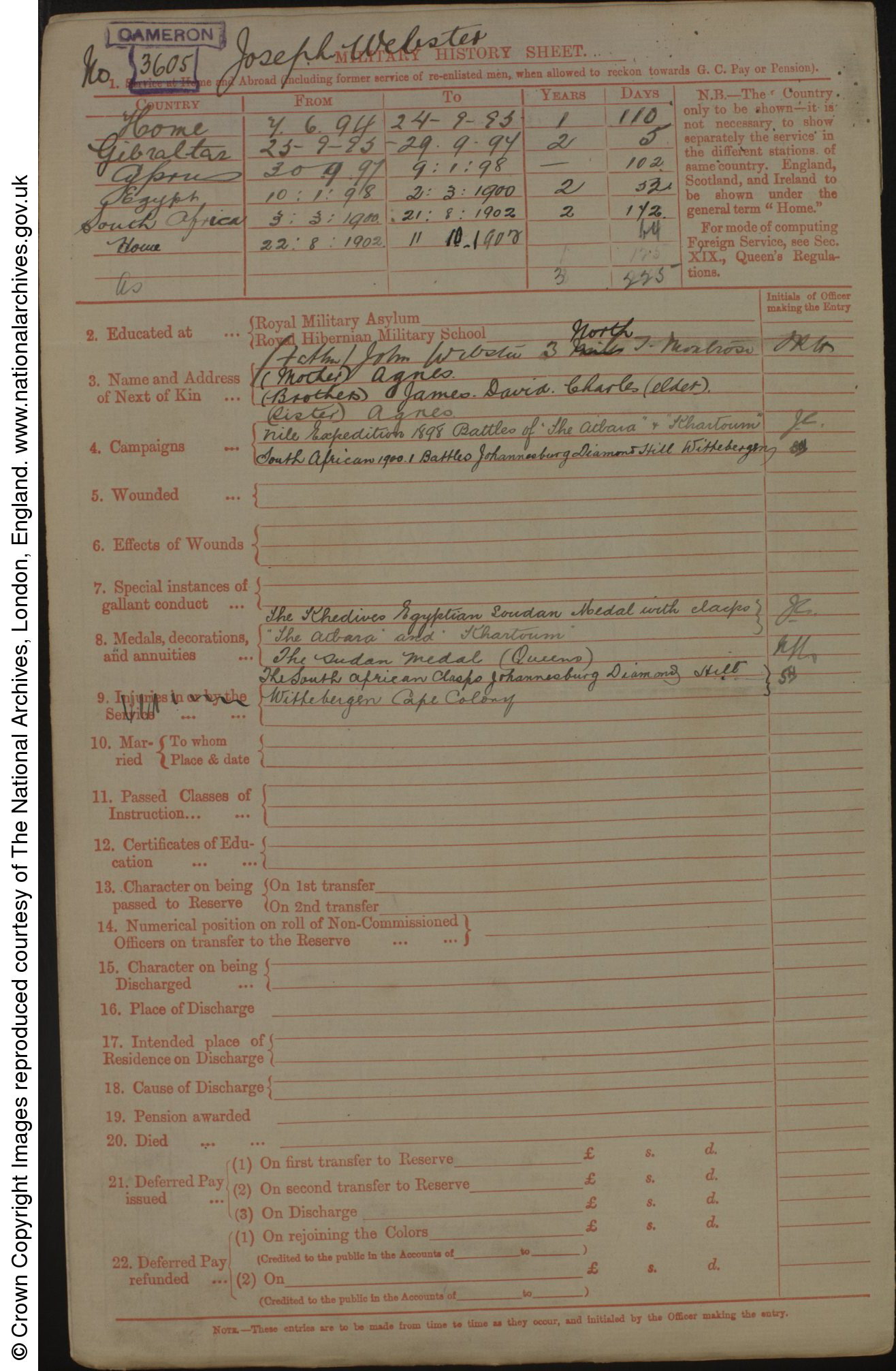 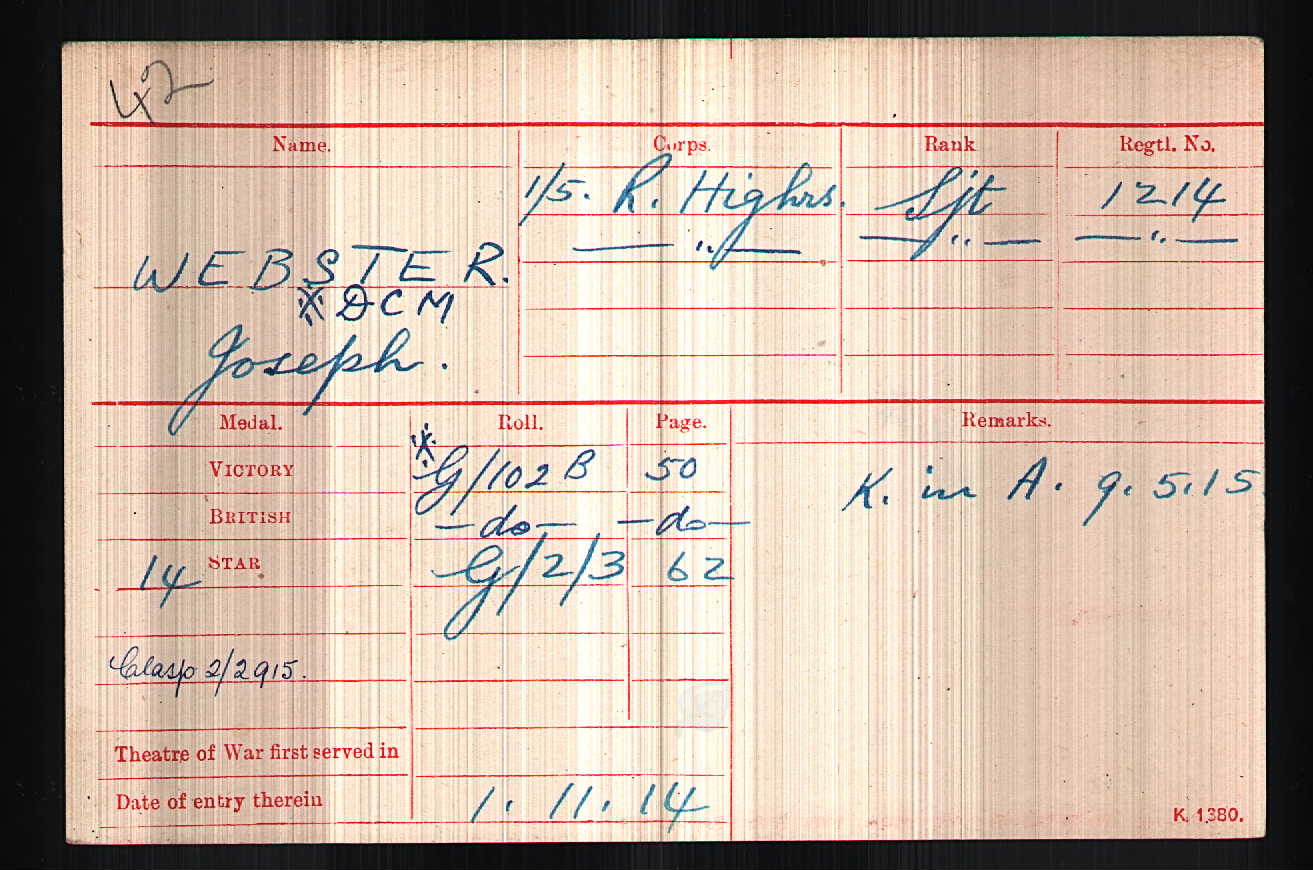 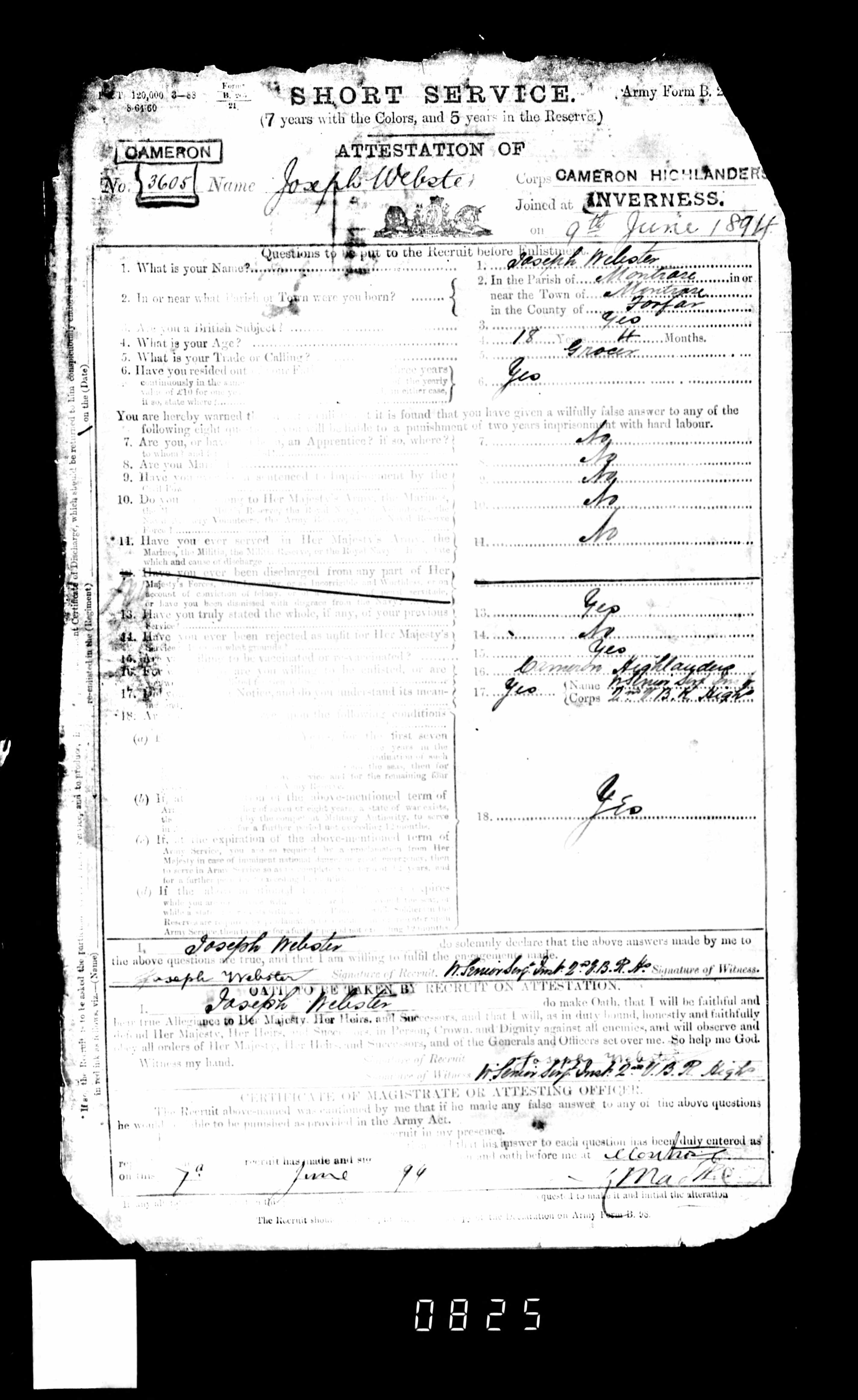 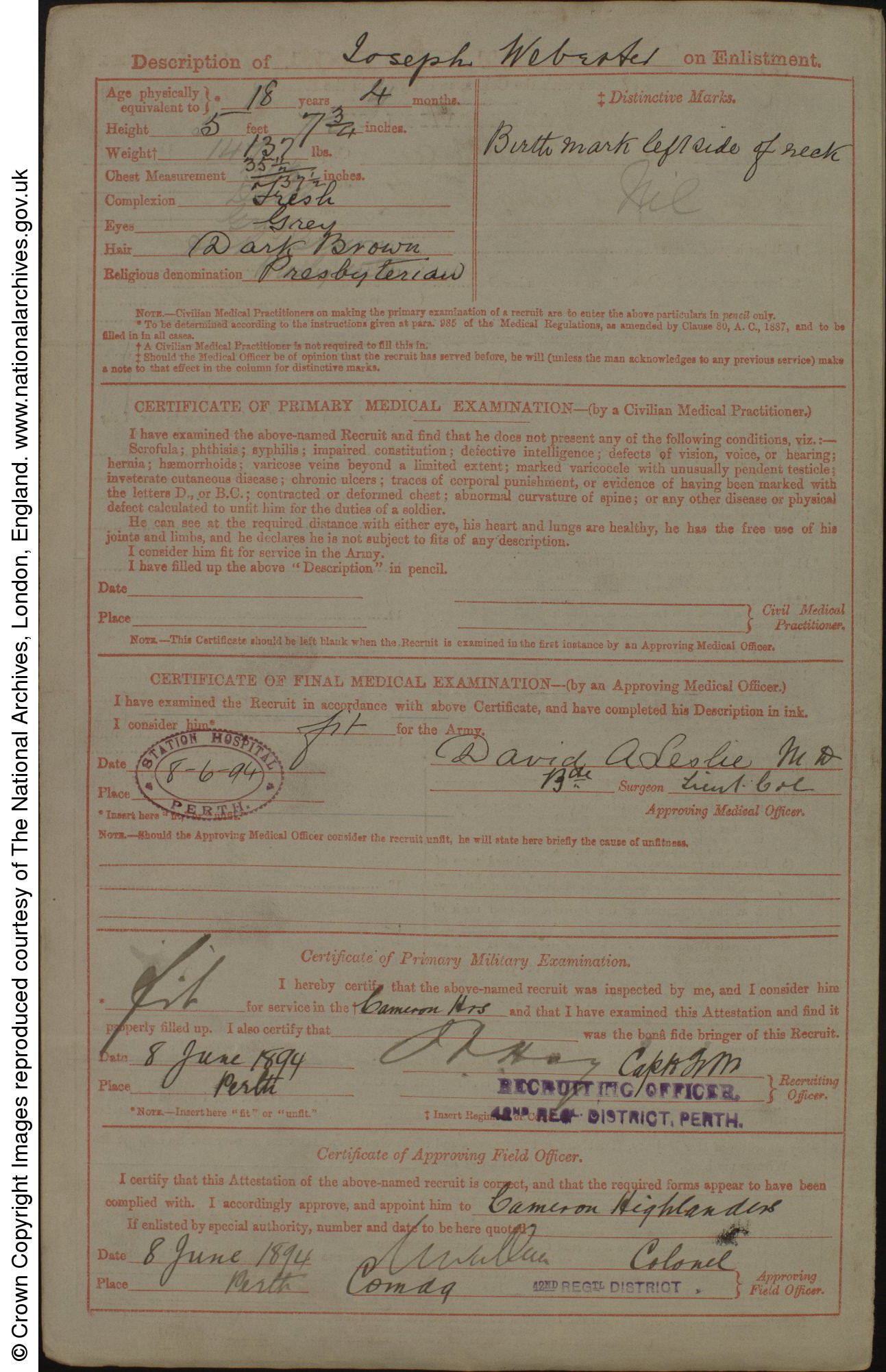 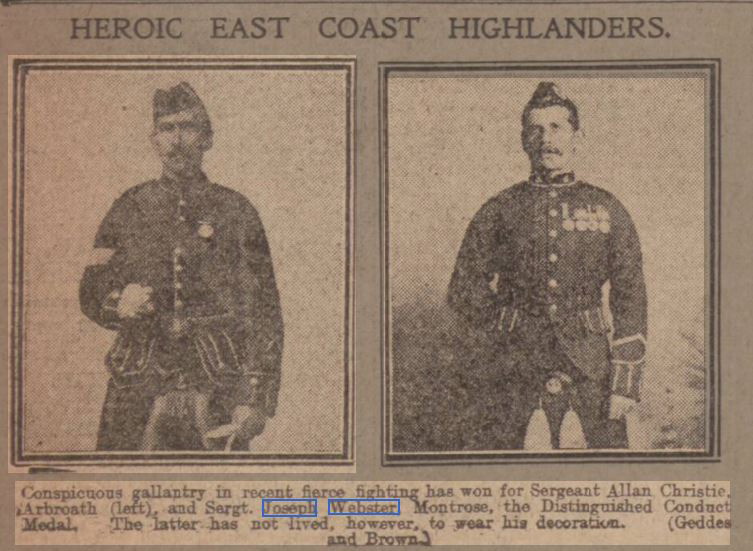 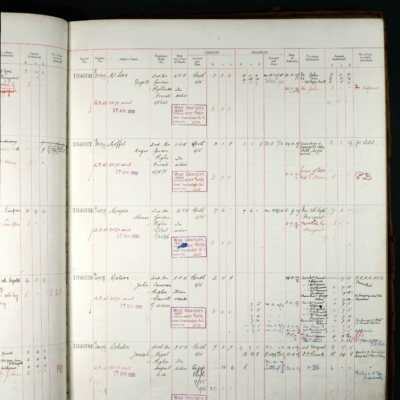 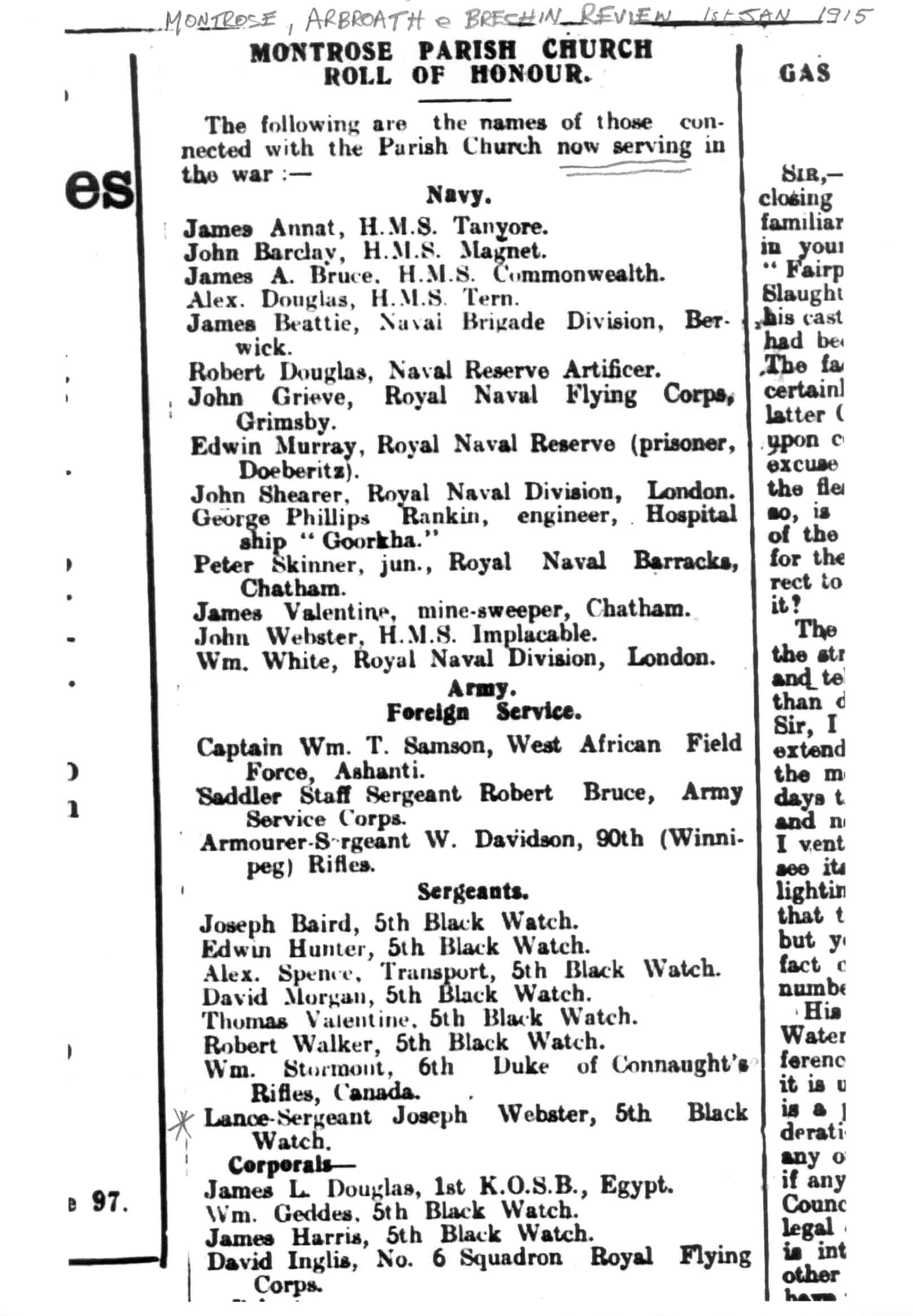 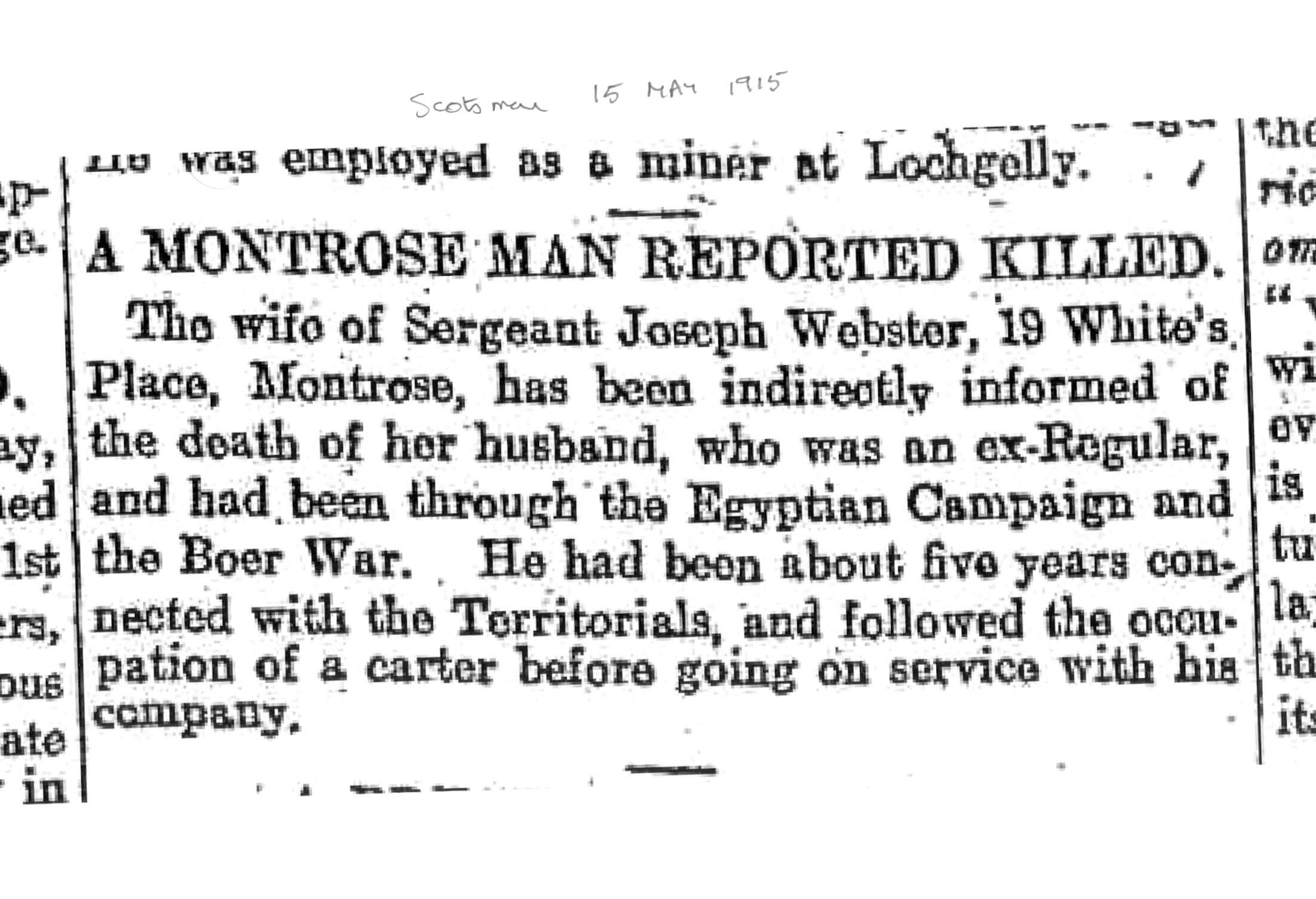 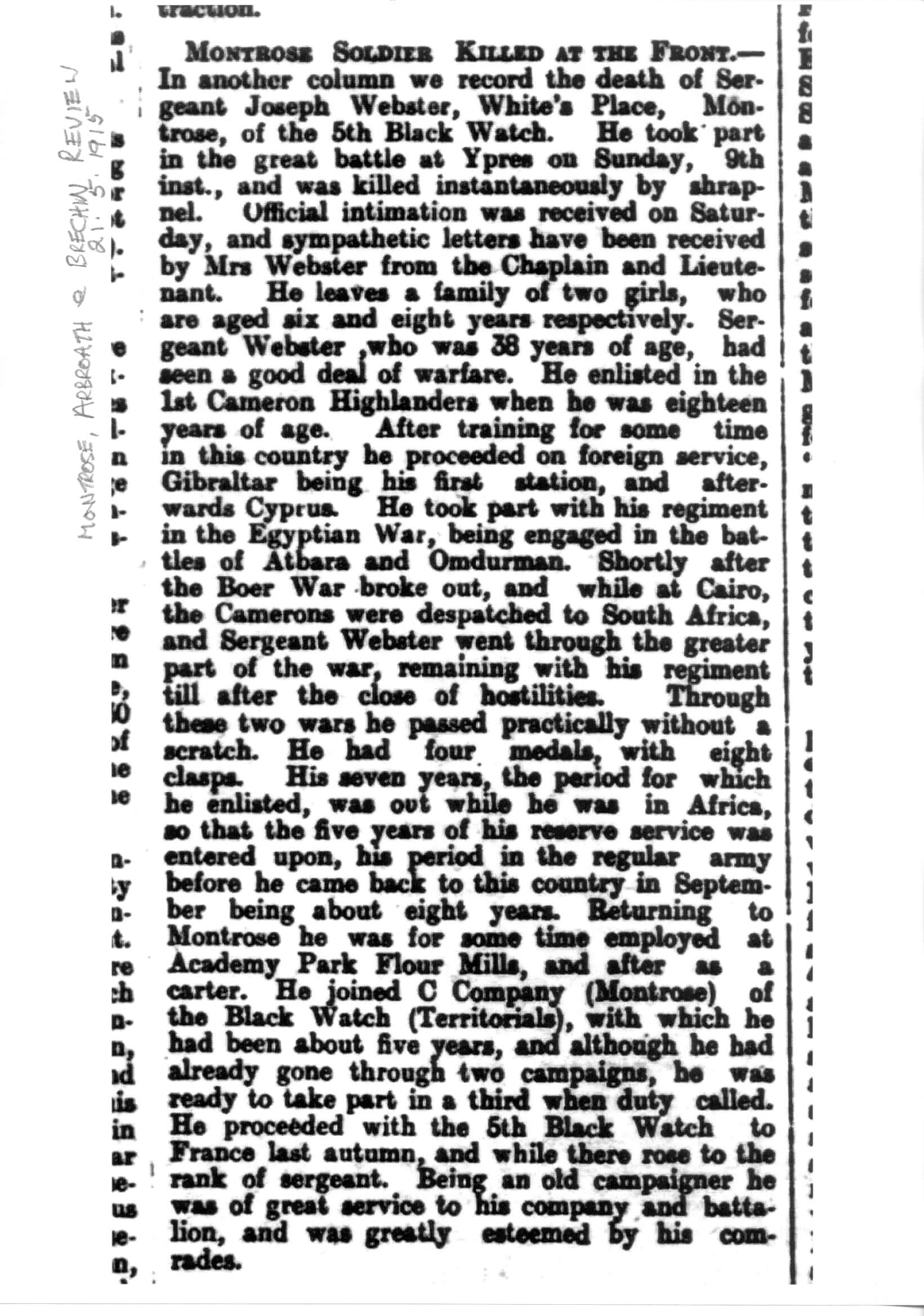 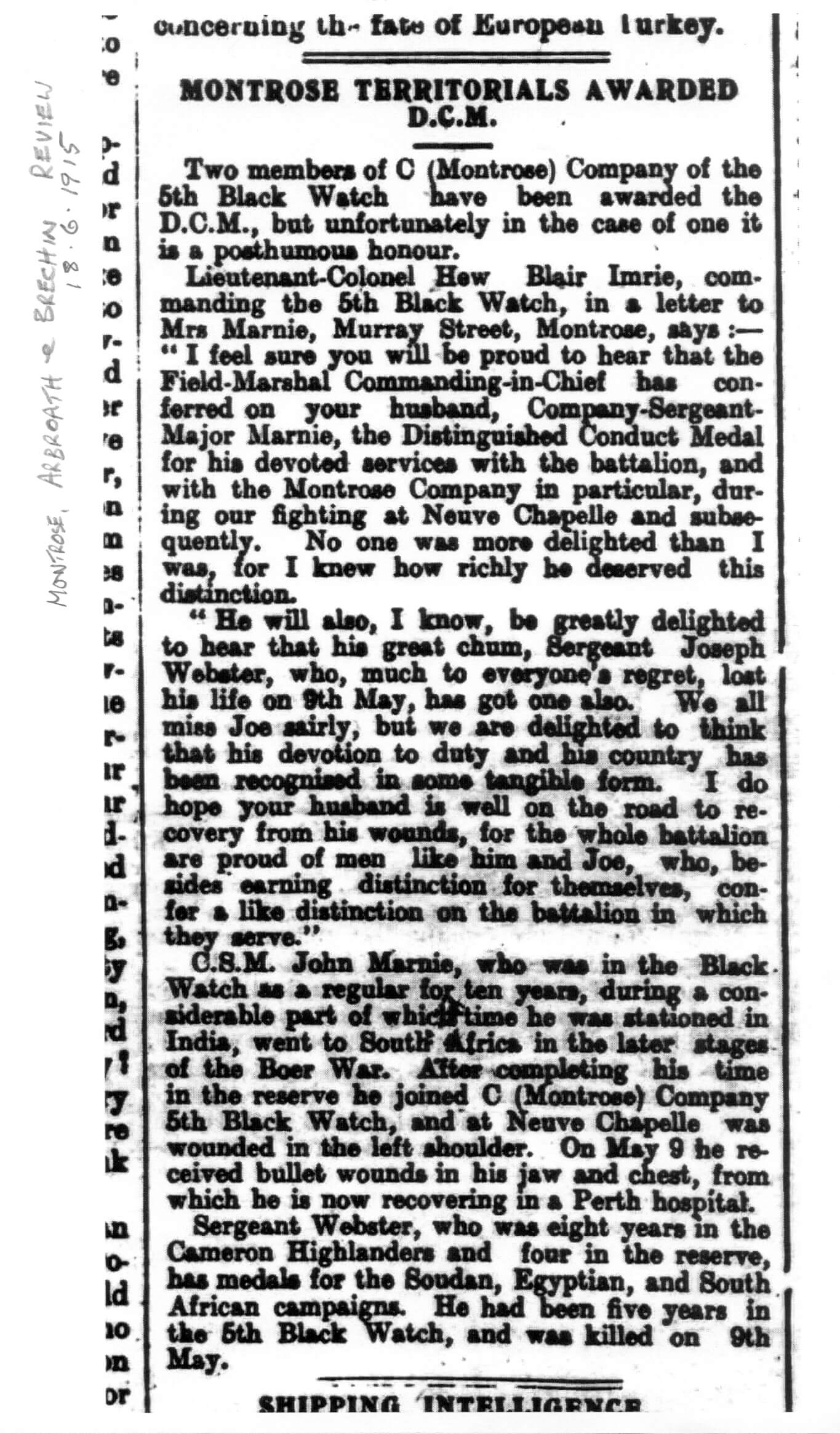 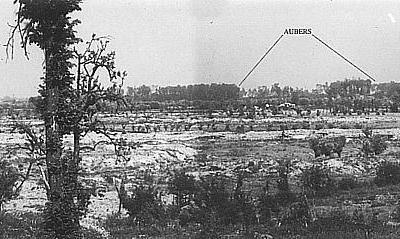 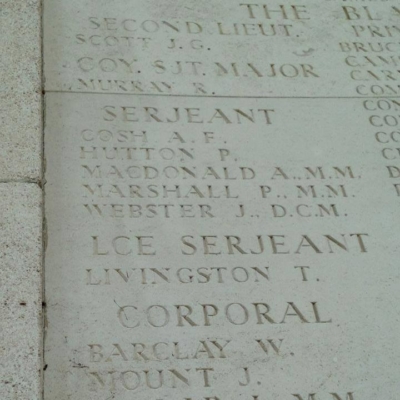 Ploegsteert Memorial to the Missing 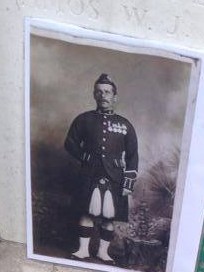 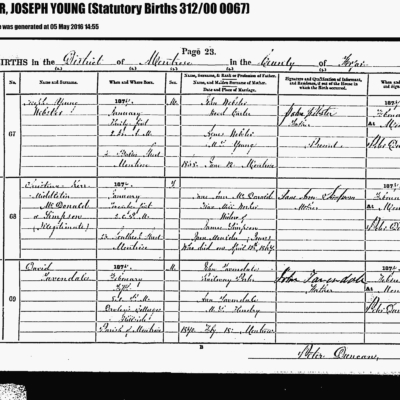 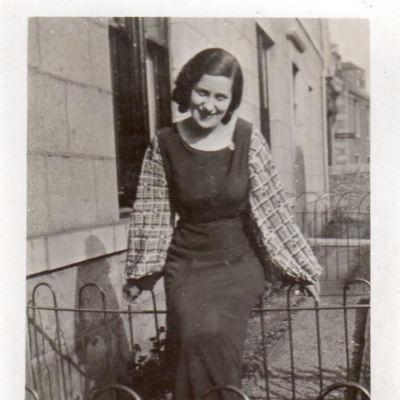