Another grandchild. Another recipe. And being a beautiful girl I came up with a fragrant and delicate baked curry using the last of my goat meat. I hope she isn’t a vegetarian. 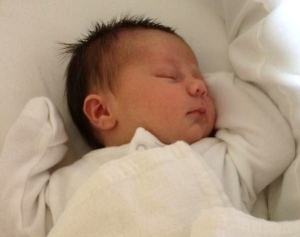 Blitz the following to make a marinade:

Soak several Saffron strands in a little warm water, add it to the marinade together with a small tub of Greek yoghurt and a few bay leaves.

Roast a teaspoon or so of the following, crush in a pestle and mortar then add to the marinade:

Sprinkle over the marinade:

Lay the leg in a casserole dish and smother in the marinade making sure to rub into the slashes.

Set aside in the fridge for a few hours.

Remove from the fridge one hour before cooking allowing it to come up to room temperature.

Pre heat oven to 200°C (fan) and bake covered in foil for 30 minutes then turn heat down to 170°C for a further 40 minutes. Remove the foil then bake for another 20 minutes or so until things start to look golden brown.

Remove the dish from the oven and allow to rest for 20-30 minutes whilst covered loosely with foil.

Evelyn Rose Morrison, born 19th March, 2015. Welcome to the world Evelyn, I look forward to meeting you in June. 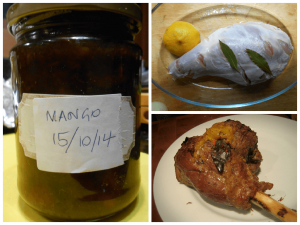