India: The Best Kebab is in Lucknow

India: The Best Kebab is in Lucknow

For the train spotters: We travelled overnight from Delhi on the mail train to Lucknow. It was a laborious 9.5 hours. We shared a 4 berth compartment with very little privacy. And it was very noisy.

Lucknow is a city of 2.5 million and at times it seems as though the majority of the populous live on the streets or in terribly overcrowded huts or rooms in decrepit old buildings. We saw it as we searched all over town looking for WiFi.

After visiting the British Residency* we didn’t find WiFi but we did discover Tunday Kababi tucked away in a bristling bazaar – try to imagine downtown Kabul. The food was fabulous with a high turnover of diners. We were stuffed after spending £2.36 in total. It is a Muslim establishment with a separate dining area for women and we didn’t feel comfortable in taking photographs inside but Tony captured a few shots of the outside.

This was our 5th day in India and the end of my vegetarianism. I simply couldn’t resist the kebabs and please understand these are nothing like the kebabs served up in England but ground meat mixed with spices and served with flat bread.

*The Siege of Lucknow was the prolonged defence of the Residency within the city of Lucknow during the Indian Rebellion of 1857. After two successive relief attempts had reached the city, the defenders and civilians were evacuated from the Residency, which was then abandoned. Wiki. 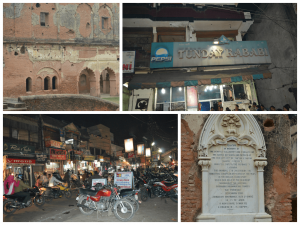