I was talking to a friend in my village last Sunday and over a beer or two he brought up one of his fond childhood memories of ribs and beans. Now, his mother made hers with pork ribs and he uses pork ribs too. And there’s nothing wrong with that but as I had a sheet of lamb short ribs plus some other bone-in off cuts I decided to create something similar.

On first thoughts my idea sounded like a stew, and the word ‘stew’ always reminds me of meat stew served up every Wednesday at the school canteen. So, this is lamb ribs (and bits) with beans, braised not stewed. Braising is partially covering meat or vegetables with liquid whereas stewing is when the ingredients are completely submerged in liquid.

Dredge the meat in flour, turmeric, oregano and black pepper. Shake off excess.

In a braising pan aka deep sided frying pan brown the meat in olive oil, in batches if necessary. Set aside.

Drain the pan of excess oil then add the onions and carrots and allow to soften somewhat.

Add the garlic, a sprinkling of oregano, bay leaves and black pepper. Cook for a couple of minutes.

Add back the lamb.

Pour in the wine and simmer for 4 or 5 minutes.

Add the tomatoes and their juice, breaking up the tomatoes. Stir and cook for a further two minutes.

Pour in stock, partially covering the meat otherwise it won’t braise but stew. Bring up to a boil then simmer for an hour with the lid on.

One hour later and things should start to thicken up a little and take on a look of ‘try me, try me’ … add another sprinkle of oregano and a grind of black pepper. Replace the lid and cook for another hour.

By this time the meat should be starting to fall off the bone and the liquid should have reduced. Stir and replace the lid for another 30 minutes.

Now it is time to stir in the beans. Pop the lid back on and leave for 30 minutes.

Take the lid off, shake the pan and if it looks good to go then get stuck in. If the liquid hasn’t reduced enough then turn up the heat and cook uncovered for 5 minutes or so. 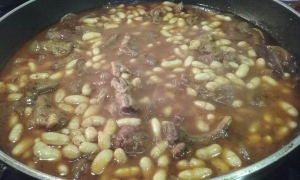