This is a ‘use up all the vegetables’ recipe. No meat but plenty of cheese.

Slice three largish potatoes then par boil them until they start to soften. Lay the slices of one potato on a buttered base of an oven proof deep dish and sprinkle with grated Emmenthal cheese and a grind of black pepper.

Split a butternut squash in half lengthways. In one half score the flesh then drizzle with olive oil and a grind of black pepper, bake in a hot oven for 20 minutes. When done scoop the flesh out into a large mixing bowl. Keep the other half in the fridge wrapped in cling film for another day.

Now sauté the following in batches in olive oil and butter adding garlic, pinch dried red chilli, dried herbs of choice and a BIG grind of black pepper with each batch.

When soft and coloured add to the mixing bowl.

Meanwhile, wilt a shed load of fresh spinach, drain, then gently sauté with the green beans, chopped garlic, black pepper before adding it to the mixing bowl.

When the contents of the mixture bowl is cool sprinkle with more grated Emmenthal cheese, add a small tub of Greek yoghurt and mix gently.

Bake in the oven at 200°C for 25 minutes or until the top layer of potatoes are golden and crispy. 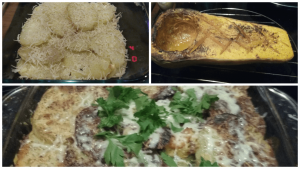