The Curious Case of a Paring Knife and its Incredible Journey

The Curious Case of a Paring Knife and its Incredible Journey

If you can’t handle my long story then let me cut to the chase, and get to the point. That is supposed to be funny if you think about a knife.

Gustav Emil Ern produces quality hand crafted knives at their factory at Solingen (the city of blades) in Germany. I have a selection of them which did include the perfect paring knife. It just felt right in my hand and I used it every day. It travelled well living with me in Norway, Denmark, France and Spain as well as London, Lancashire and Newcastle but after 21 years of constant use and abuse (think dishwasher) the handle fell apart. I buried the blade and the remains of the handle in the garden when the builders had dug up some tiles searching for a leaking pipe. It would be happy there. RIP my little friend.

I have other knives, a couple from the Sabatier range manufactured in France by Déglon a company founded by a Swiss man, Jean Déglon, in 1921. If Jean was still alive I would have to tell him that his knives just don’t feel right in my hand.

Interestingly, I have two Friodur Z knives, a long bladed one with a razor sharp point that is guaranteed to stab you at least once; the other is a boning knife. Both have wooden handles that are also showing signs of dishwasher abuse even though I oil them from time to time (olive oil of course). They were manufactured at the Willingswerk in Solingen and the forged blades are ice hardened, hence the name Friodur. The knives are coming up to 60 years of age, given to me by my late uncle John who married Eva, a lovely German woman who died too early. By the way never try to catch a falling knife!

My two Santoku knives, one has Japanese writing engraved on the blade and it probably says, Made in China. The other is a Pro Cook (German steel) which I prefer as it feels right in my hand.

I have been in the wilderness regarding a paring knife for a couple of years. I’ve searched online, visited catering wholesalers and shops but couldn’t find a replacement until one night an online advertisement for pairing knives jumped out at me. Boasting it is made of premium AUS 10 steel with a unique sloped bolster; blades have an edge angle of 15 degrees rather than 25. It looked right so I ordered one together with a 10 inch skillet. At this point I admit to drinking wine and being taken in by the marketing blurb and not taking the time to do a little research and being rash and being irresponsible.

Three weeks later I picked up my order from the post office, after paying import dues for both items, although it was obvious the single box only contained a knife unless the skillet rolled up into a large cigar.

I checked the paperwork. Yep, I had paid import dues for the full order. The paperwork didn’t mention 1 of 2 packets so my skillet must still be in the USA or DHL’s distribution warehouse in Germany or even, God forbid, somewhere in the Spanish postal system.

I contacted the supplier who said the skillet hadn’t been sent but they would dispatch another marked as ‘replacement’ so that I won’t have to pay import dues, hmmm, we’ll see.

Meanwhile, I opened the rather splendid box containing my new paring knife. It felt right until I read the small print on the box which clearly stated: Japanese steel made in China, so my logistics background kicked in. I had purchased a knife which had clocked up the following journey, Japan-China-USA-Germany-Spain around 20,873km, that’s some carbon footprint and I feel slightly ashamed.

Now, I am not a great climate campaigner (I do recycle) but I have recently heard several people speak quite angrily about Greta Thunberg the climate activist. I have great admiration for a teenage student who has done more than any other person on the planet to wake us all up. I also like her because her middle name is Tintin.

I don’t think we should get angry with the messenger when Britain’s wealthiest man and fellow Chelsea supporter, Sir James Ratcliffe, tells the country to get behind Brexit then promptly buggers off to his new home in tax haven Monaco with his fortune. And how did he accumulate his wealth? Plastics. PLASTICS. Why aren’t people getting angry with Jim instead of Greta? 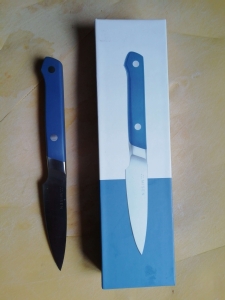 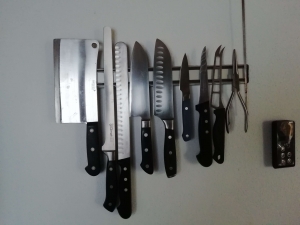