The Ultimate Guide to Pasta

The Ultimate Guide to Pasta 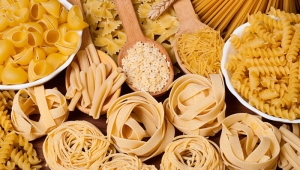 I am not Italian but a meal of home-made Minestrone Soup, and then a simple Spaghetti al Pesto followed by Osso Buco, made
lovingly by someone’s Nonna is my kind of heaven. Steve Albini once said, ‘In heaven, after antipasti, the first course will be pasta’ and I agree with that.

Pasta comes in different shapes, sizes and colour and is predominantly associated with Italy although evidence suggests that
it was introduced by Marco Polo returning with it from China. I have my doubts about this because pasta, just like cheese, is not usually found on the tables in the Far East unless you mean noodles.

Anyway, today Italy rules supreme using durum wheat to produce a marvellous range of shapes and sizes to suit every kind of meat, vegetable and sauce.

I read somewhere that there are over 300 different types of pasta and umpteen different names too but here’s some of the most popular. They come as short, long, sheets, tubes, ribbons or decorative.

Spaghetti – doesn’t really need much introduction. It goes with just about any sauce and is a favourite for kids especially spaghetti bolognese and alphabetti spaghetti canned in tomato sauce and dreamed up by the marketing men at Heinz, Knorr or
Campbell.

Pappardelle – the flattest of ribbon pastas, pappardelle is often paired with ragùs and game. It means ‘little tongues’ in Italian.

Macaroni – the most versatile of pasta shapes which can be added to soups and salads. It’s used for the classic macaroni and
cheese dish.

Rigatoni – a wider version of penne with ridges down their sides which makes it perfect to hold any sauce.

Tortellini – are perfect to fill with meat, vegetables or cheese.

Conchiglie – shell like shape. Conchigliette is a miniature version.

Orecchiette – is an ear-like shape, it holds any sauce well.

Orzo – the tiniest pasta shape is a bit like a large grain of rice. It’s often used in Minestrone soup.

Bucatini – spaghetti like but with a hole running through the centre. Comes from the Italian word buco for hole and bucato
meaning pierced.

Tagliatelle – another ribbon pasta which is usually narrower than fettuccine. From the Italian tagliare, meaning ‘to cut’.

Cannelloni – large pasta tubes, usually baked with a filling and covered by a sauce. Italian meaning is ‘large reeds’.

Ditalini – known as ‘little thimbles’ and is good for soups, casseroles and salads.

Fideo – is a short version of Angel Hair, often used in soups.

Gigli – known as ‘lilies’ because of its shape and is perfect for heavy sauces.

Penne – very versatile tubes good for use in bakes.

Penne Rigate – same as penne but with ridges.

Radiatori – it’s in the name, yes they look like ‘radiators’.

There’s a lot more but the above are familiar to me. If there’s something I have obviously missed out then let me know.

Lastly, here are some recipe ideas for pasta.