My Charity Work and the Only Pirate in the Village

My Charity Work and the Only Pirate in the Village

I’ve seen it all now. My charity case, Tony Cartwright has only gone and joined the pirates. And I don’t mean Pittsburgh Pirates or any other sports team. It’s just that he doesn’t want to be called Diabetic Tony any longer… now it is Ed Teach aka Blackbeard.

For people who know me are aware that every Sunday I accompany Tony to the bars in the village. I make sure he behaves himself and that he arrives home in one piece, and peace. I don’t mind giving up my Sunday for charity work.

Edward, for those that don’t know, was a notorious English pirate who pillaged and plundered around the West Indies in the 1700s, now I know that Tony was an old salt dog in the navy but this pirate business is stretching things a bit too far.

He keeps saying stuff like, Aye Jim Lad and Pieces o’ Eight. His best is Let’s jump on board, and cut ’em to pieces which is a touch embarrassing in the bars of Monte Lope Alvarez, they are friendly people. Generally. Try explaining that in Andaluz.

Still it keeps him happy. 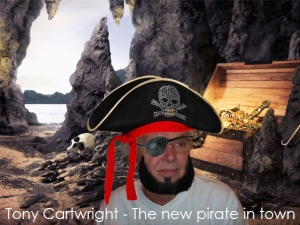 The Pirate of Monte Lope Alvarez