Solomillo de Pavo here in Spain makes a nice change to pork. However, I fell for a supermarket con as it was actually 3 fillets packaged to look like a loin. So that’s what I got for not buying from a butcher.

Lightly fry the sausage meat in a frying pan – you shouldn’t need to add oil. Remove when brown.
In the same pan add the onion and fennel with a little butter and sweat until soft. Add garlic.
Add tomatoes and meat then stir gently. Cook for 2 minutes.
Add breadcrumbs, parsley, stir and season to taste.

Flatten the fillets between two sheets of cling film overlapping and making a rectangle. Place the stuffing along the length of the meat and roll up tightly then tie up with cooking string. Allow to firm up in the fridge.

When ready bring the meat up to room temperature and rub it with a little olive oil, a grind of black pepper and then place on a baking sheet in a preheated oven at 180°C (fan) for 40 minutes or until the meat is cooked through.

Whilst the turkey is resting place the pan that it was cooked in on the hob over medium heat to make a white wine gravy.
Add 200ml dry white wine and scrap up any bits from the bottom of the pan cooking for 5 minutes. Whisk in one tablespoon flour until it has been incorporated. 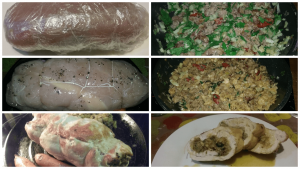