Sweden: For the Love of a Herring

Sweden: For the Love of a Herring

♫ ♪ ♫ “In the stormy seas and the living gales, Just to earn your daily bread you’re daring, From the Dover Straits to the Faroe Islands, As you’re following the shoals of herring.” ♪ ♫♪ ♫ T. Duggins

Herrings, Sardines, Pilchard, Sill, Sprat, Smelts… it is confusing as they are all related but all are rich in healthy omega fatty acids. But my preference when it comes to pickling is Atlantic herring, the Mediterranean sardines I leave for the BBQ.

I often enjoyed pickled herrings in Scandinavia, none more so than in Sweden.

An entrée consisting of pickled herring and potatoes is typically served with snaps. And here’s what Christer Engström says:

You can give us herring, And you can give us sill
But you will still be erring
Unless you also will
Give us a glass of Akvavit
That sure smells sweet
To Swedes in heat
It gives the fish its feet
It makes the dish complete

The earliest documented usage in Sweden of the name Christer is in 1484 in Hallands län and I have a bottle of akvavit in the freezer just in case he or she comes by.

And thinking of pickled herrings and Sweden reminds me of this.

♫ ♪ ♫ “I see the snaps and the snaps sees me down through my hals to my vänstra knee.” ♪ ♫♪ ♫ Pissed Swedes

Swedes celebrate kräftskiva in August when they gather outside to drink and eat crayfish. Akvavit (snaps) and beers are consumed in great quantities along with boiled crayfish and fresh dill. It is usually accompanied by bread and salad.

I attended a kräftskiva once but by the time the crayfish arrived I was already pissed and now cannot recall too much except we had to wear an inane hat and sing silly songs. They were silly to me because they were in Swedish, I just remember having to follow tradition in taking a swig of akvavit and a beer before continuing in song.

And don’t worry if it is chilly because the akvavit is similar to anti-freeze.

Anyway, the Swedish branch of the Vikings (the best ones I am related to, the Danes) sing a great snapsvisa song. 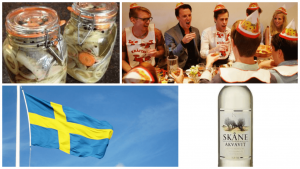