Jamaican goat curry makes use of fiery scotch bonnet chillies, something I wouldn’t ordinarily see in rural Andalucía but thanks to my last visit to Granada I still have a few left in my freezer.

After the abolition of slavery in the 1800s thousands of migrants flocked from India to work in the Caribbean plantations until stopped by the Indian government at the outbreak of World War I. A substantial number of them stayed on the Caribbean islands as a shortage of ships, German submarines and the Indian government did not want them back anyway so they had little choice.

Anyway, this passage in Indo-Jamaica history is where the curry influence comes in.

First up thinly slice an onion and fry it slowly until it is soft and golden brown. Set aside.

Mix the above together and allow marinating in the fridge for at least 4 hours. When ready to cook remove from the fridge and bring up to room temperature.

Heat large frying pan over medium heat and brown the meat leaving the marinade in the bowl. Once the meat is brown slice another onion and add that to the pan together with the marinade. Stir and cook for 5 minutes.

Add a big dollop of tomato purée. Stir and cook for one minute.

Add 400ml hot water, cover and allow the meat to simmer for one hour.

Peel and dice one large sweet potato (I added a chopped yellow pepper and a sliced purple carrot) and add that to the pan. Stir, cover and cook for 20 minutes.

Add the brown onions and cook uncovered for another 10 minutes by which time the liquid should have reduced, the potatoes are soft and the meat has started to fall off the bone.

And cannabis (Ganja) was introduced to Jamaica from India and smoking it makes you walk like a Jamaican. 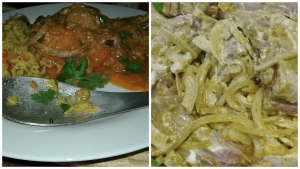