A beef stew reminds me of Thursday lunch time at my school canteen in south London. I didn’t like it then and it has tainted me ever since.

Stews have been made for thousands of years, 8,000 in the case of China, and virtually every country of the world has a stew to claim as their own.

But what is a stew compared to a casserole?

A stew is meat, fish or vegetables or a mixture of these that has been cooked in liquid (water or stock, wine even) with a
lid and served in the resulting gravy.

Casserole is the name of the vessel that the food is cooked in, usually in the oven, also with a lid.

So as stew is only 4 letters of the alphabet here is the start of an attempt to overcome my stew phobia after all it’s really a one pot and I find one pot meals rather comforting and wholesome.

And where better to start than North Africa. Here’s my version:

1 large carrot, peeled and diced (and one small purple carrot if you have one)

Drizzle the meat with olive oil then mix in the spices, salt and pepper. Add the shallots too.

Add a glug of oil to a deep side frying pan over low to medium heat and gently fry the onions until golden brown then set aside.

In the same pan (add more oil if necessary) gently brown the meat together with the shallots being careful not to burn the spices.

Add the cooked onions, carrots, potato and tomato purée then cook for a minute or so.

Add a splash of white wine and cook it off.

Now add the stock so that everything is just about covered.

Put a lid on the pan, bring up to a boil then turn down to a simmer – leave for one hour or more.

Meanwhile, add the tomatoes to a bowl and mix with the garlic, dried herbs and lemon zest.

When you are satisfied that the lamb is fork tender take off the heat, add the tomato mix, stir through gently then allow to rest with the lid on whilst you make couscous.

Enjoy your stew although there’s part of me that wants to call it a casserole!

Here are some other ‘stew’ recipes: 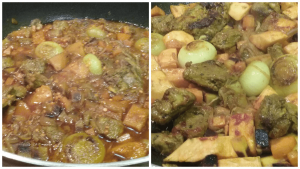