For All the Tea in China

For All the Tea in China

One year, in 2010, during October to be precise, I was travelling in S.W. China in Yunnan – which means south of the clouds – province from Kunming, the eternal city of spring, to a tea plantation 600km west towards the Burmese border, yes I know it is actually called the Republic of the Union of Myanmar but it will always be Burma to me just like Mumbai is really called Bombay (think Mumbai Duck) or Beijing come to that, what was wrong with Peking? Peking sauce is wonderful; Beijing sauce just does not cut it.

I was there sourcing organic broad leaf tea for a new venture – Tea Cargo.

Anyway, getting back to the journey on Chinese highways, now that’s an experience. But I digress. I was in the rear of a 4×4 driven by the tea factory owner Mr Zhang and his son in the passenger seat who was also called Mr Zhang and next to me in the back was Dr Dai Hai, my Chinese doctor friend and acting interpreter. We were about 3 or so hours into our 8 hour slog when I was asked if I would like to stop for something to eat. A beer more like I wanted to say but being respectful I said I was hungry and that we should eat wherever they normally would. Hmmm, food in rural China.

Food in rural China is how it should be, they cook whatever is available and what’s in season and they cook everything so we had a steaming bowl of a thin soup with black slimy mushrooms (specialty of the region and in season too), greenery which could have been some kind of spinach and chicken’s feet. Now I have travelled extensively and experienced different cultures and cuisines but there’s only so many chicken’s feet you can chew, let alone swallow. Not wishing to offend my host I gratefully accepted another bowlful. They had canned beer by the way but it was served at room temperature so I politely declined.

Outside the restaurant/service station/shop/food hut was a fruit seller and Dai purchased a large bag of gigantic apples and Mr Zhang produced a hunter’s knife. Dai, being a doctor said, you must never eat the skin. Hmmmm.

Finally and I mean finally, we arrived at our hotel in Changning – Baoshan prefecture for those that are interested in geography like me – around midnight. My hosts enquired if they had cold beer for the Englishman and asked me if I wanted something to eat. I went to my room with four very cold cans of Tsingtao beer, a bag of hot pork ribs and another of skewered chicken. No feet.

By the way they said that Changning is the area of the source of the Lancang river – think Vietnam “Mekong” but according to my research that is incorrect as it rises in the Tibetan plateau so although it flows nearby – something was obviously lost in translation.

As a side note: The first Protestant missionary who came to China was an Englishman called Robert Morrison, no relation to me as far as I know but it leads me to say my mother’s maiden name is Partleton. A relative has gone to the trouble of compiling an online family tree, “In Their Shoes” and it is here you can read about Sarah (1845-1849) who was raised in abject poverty in Feathers Court, Drury Lane, London but sadly died of cholera, a disease that today we know is very easy to cure. Anyhow, I hope Sarah knows that I think about her sometimes. Co-incidentally, Tea Cargo’s office in London at 146 Fleet Street is within spitting distance of Sarah’s Feather’s Court.

I devoured my hot food and 2 of the cold beers before hitting the pillow for 6 hours sleep as we were up early for breakfast before heading off to the tea factory and plantation – well, it is not actually a plantation but tea trees (yes, trees not bushes) that grow wild, randomly at 7,500ft above sea level.

Breakfast: Imagine a Chinese banquet of spicy food and that’s what we had at 08.00 with green tea before heading off to the factory and tea trees at Mangshui. We had boiled eggs too. 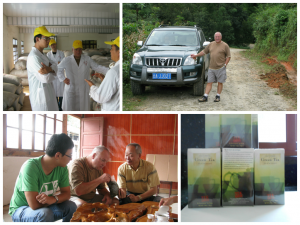